Buy Low, Or Don't Buy At All 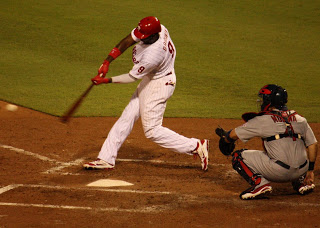 No Cody Ross, no Nick Swisher. Happy me. No, neither guy stinks. No, I didn't want to think about them in a Phillies uniform in three years. With both off the board, neither will be here. Again, I am quite happy with that.

Apparently RAJ is considering Scott Hairston now. I just don't really see much point to any commitment here. Sure, if it's a year or two cheap, I could certainly see the benefits of a righty bat with power, but if this gets expensive, run away, again.

Another name coming up is Jason Kubel, who put up some impressive numbers from the left-side in Arizona, especially in the power department, where his 30 homers and 90 RBI's grab your eyes. Arizona could deal him now that they got Ross. Defensively, he's about the same as Laynce Nix, but with more power. If he were platooning with either Darin Ruf or John Mayberry Jr., that could definitely make a lot of sense, though my sense is that Charlie would play him more than many of us would want. If the Diamondbacks want to deal him on the cheap, it's hard to argue with a 30 homer bat to plug in, but I would not expend any prospects I'd miss on him.

I continue to think the best option is to simply wait it out unless a deal is really good. If you tell me that Ruf is in left and Nix picks him up against some righties, and Brown is in right, and Mayberry does the same for him, I'm ok with starting the year for that. I still hold out more than a little hope that one or both of them can grow into being a starting (600 PA's) outfielder, feel Ben Revere is more than capable of the same, and like Tyson Gillies enough based on last season in Reading, to feel that there's no reason to commit much to these guys on the market now. If you said the Phillies biggest risk is on a couple of young outfielders this year, I'd say that probably doesn't decide the outcome of the season. I still that riding on Roy Halladay's right shoulder.

Cool and feminine, and perfect for keeping you and baby comfortable.