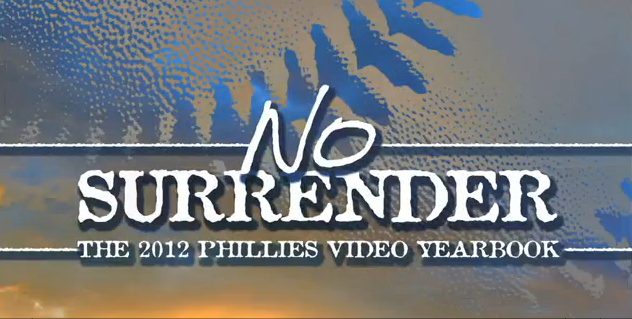 Remember when you could buy a Phillies video yearbook and give it to someone for Christmas?  This year, no such luck.  Though previous editions were released in December, such as 2011's video released December 19.   January 30th we finally now that we can order the DVD starting February 12, 2013.

New for 2012: the video will be narrated by Scott Franzke and Larry Andersen.  Traditionally a player who made a big impact each season is picked to be the narrator.  The lone exception previously was 2010 when Steve Martarano took a break from political talk radio to narrate the film, presumably because Roy Halladay is as monotone and uninspiring a speaker as it gets.  Cliff Lee narrated 2011.

The best solution would probably have been to have Ty Wigginton narrate the film.  Think about it: Wigginton is the face of the 2012 season.  He played real infield positions entirely too often (and even some outfield positions) and even ended up hitting cleanup a number of times.  When you think back to why the Phillies what they were in 2012 "Ty Wigginton" is the first thing that comes to mind.

Why is it so late? Maybe Vance Worley was narrating it and he got traded away, causing them to start over.

One other possible cause for delay would be that the people wanted to come up with a perfect name.  "No Surrender" is clearly the result of many hours of hard work.

Check out the trailer here: