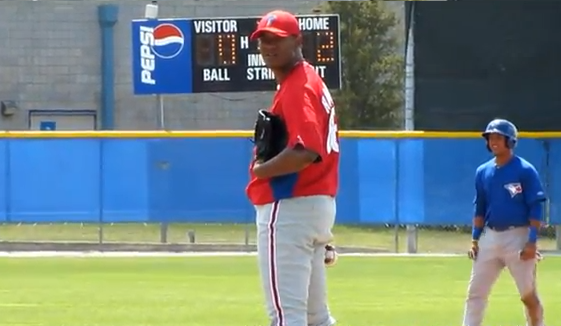 Screen capture of video from mlbprospectportal.com

After the Phillies added Chad Durbin today they needed to clear space on their 40-man roster.  To find that space the Phillies designated for assignment minor league reliever J.C. Ramirez.  Ramirez is best known (or perhaps only known) for being part of the Phillies return in the infamous trade of Cliff Lee to the Seattle Mariners in December 2009.

At the time, Phillies General Manager Ruben Amaro, Jr. stated that the deal was absolutely necessary to replenish the Phillies' diminished farm system:

If we had just acquired Roy and not moved Lee, we would have been in position to have lost seven of the best 10 prospects in our organization.  That is not the way you do business in baseball.

Those seven players were Travis D'Arnaud, Michael Taylor, Kyle Drabek, Jason Donald, Carlos Carrasco, Lou Marson, and Jason Knapp.  Looking at those seven players today, the Phillies gave up a still-catching prospect, a backup catcher, a utility infielder, and a bunch of injury-ridden pitchers.  Hardly anything to overreact about.

But the Phillies did give up Lee.  They received Ramirez, reliever Phillippe Aumont, and outfielder Tyson Gillies.   At the time, Ramirez was coming off a class A season where he pitched to a 5.12 ERA and an 8-10 record.  Ramirez only showed a couple flashes of brilliance.

Ramirez is turning into the potential gem of the bunch. The 6-3 righty will start his second game in Reading tonight against the Bowie Baysox. He knows Lee's shadow isn't going anywhere. So the happy-go-lucky 21-year-old does his best to use it as positive energy.

After starting off 4-0, Marcus Hayes of the Daily News did a piece on Ramirez that praised his new-found success.  Finally the team was seeing the potential:

Ramirez is glad to display it.

2012 was mostly spent at AAA Lehigh Valley but included a demotion to Reading.  Ramirez was 3-2 with a 4.28 ERA as a reliever at Lehigh Valley and 0-2 with a 3.68 ERA at Reading.  Those numbers were not inspiring enough for the Phillies to put stock in Ramirez going forward.

By designating Ramirez for assignment, he is removed from the Phillies 40-man roster.  Over the next ten days they have to do something with his contract.   He could be traded, released, or put through waivers to outright him to AAA Lehigh Valley, which means Ramirez could stick around.  Ramirez was selected over Joe Savery.  One thing seems clear: Ramirez is a dud.

Let's see how Cliff Lee in his prime for Phillippe Aumont and Tyson Gillies works out.