Eagles Flyers Phillies Sixers About Us Write For Us
Around the NHL: Volume 1
Jayson Werth: Phillies Bigger Threat To Nats Than Braves 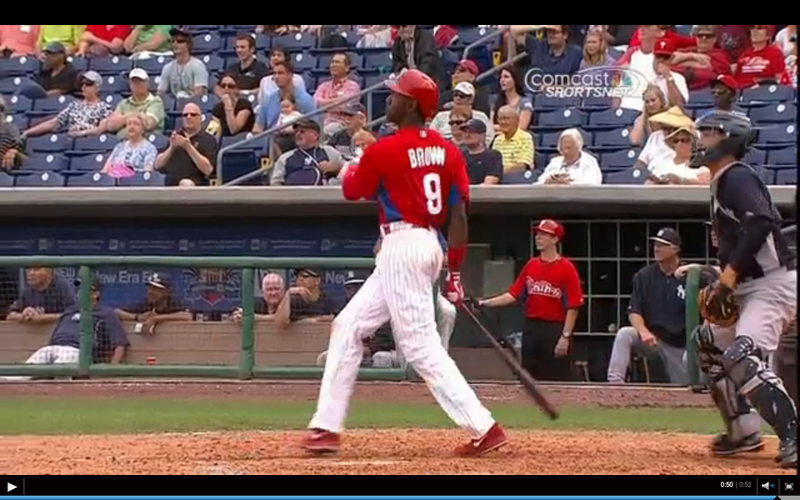 Domonic Brown continued his hot start to the spring, going 1-for-2 with an RBI double and two runs scored in the Phillies' 12-5 loss to the Twins.

Right out of the gate, all looked well for the Phillies in their fifth spring training game of the season. Then, as several pitchers continued their tryout to make the 25-man roster, the struggles that come started.

The relievers struggled in the later innings and despite the offense belting out 10 hits, the Phillies fell for the third time this spring, 12-5.

From the start, the Phillies looked solid at the plate. Ben Revere, a former Twin, led off the game with a single and stole second. Domonic Brown followed with a walk. Ryan Howard singled home Revere and advanced Brown to third. Brown scored on a sac fly by Carlos Ruiz, capping a two-run inning.

Making his spring debut was the Phillies' likely choice for the fifth starter spot. John Lannan did allow a second-inning run on an RBI single by Aaron Hicks. But that was the only damage in Lannan's two innings. He allowed one run on three hits while walking one and striking out one.

Ruiz picked up his second RBI of the game in the third on a single scoring Brown, who reached on a fielding error.

But the Twins quickly cut the lead back to one on an RBI single by Trevor Plouffe. That hit came off Adam Morgan, who allowed four runs (one earned) on five hits in 1 2/3 innings of work. An error leading off the fourth set up a big inning for the Twins. John Mayberry Jr. committed a fielding error that allowed Pedro Florimon to reach third. Hicks doubled to score Florimon and would eventually score himself on a three-run home run by Ryan Doumit. Doumit's blast came off Kyle Simon, but two of the unearned runs were still charged to Morgan.

The Phillies answered with a two-run fifth. Revere reached on an error to lead off the inning. Brown would double to score Revere two batters later. Ruiz notched a third RBI on a single to score Brown, cutting the Twins' lead back to one.

But the Twins would pile on from there. Three runs scored in the sixth off Justin DeFratus. Three more scored off B.J. Rosenberg in the seventh.

There were a few positive bullpen performances, as Antonio Bastardo and Mauricio Robles worked scoreless innings.

And there were plenty of positives at the plate. Ryan Howard continued to see the ball well, going 1-for-2. Domonic Brown continued his spring training tear going 1-for-2 with a double and an RBI. Carlos Ruiz was 2-for-2 with three RBI.

The Phillies are back in action tomorrow when they host the Atlanta Braves in Clearwater at 1:05 p.m.