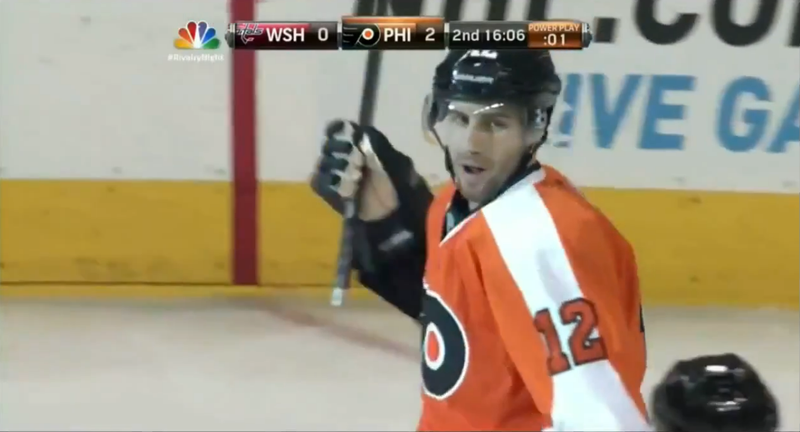 The Flyers played strong early and managed to keep the Washington Capitals in check en-route to a 4-1 win at home Wednesday night in Simon Gagne’s return to Philadelphia.

Philadelphia (10-11-1), coming off of a disappointing loss to Toronto on Monday, wasted no time establishing the momentum in their team’s favor early as Claude Giroux scored to give the Flyers
a 1-0 lead after just 28 seconds of game time. It was the fourth goal in a game’s first minute for the Flyers, who were in control for just about the whole game.

Wayne Simmonds followed his Captain’s lead soon after, netting his eighth goal of the season on a Power Play four minutes into the first period.

The Flyers converted two of three power Play opportunities into goals, continuing improvement in an area that had troubled them in the season’s early-goings. Philadelphia now ranks ninth (9th)
in Power Play percentage at 20.5%, or about 3% better than two weeks ago, and the increase has produced tangible results, with the Flyers’ goals per game rising about a half of a goal (+ 0.5).

Washington (7-11-1) played rather passive hockey early, and did not score until the game’s final three minutes, courtesy of RW Joel Ward. They often looked slower than the Flyers’ skaters,
and were out-shot as well, much to the detriment of goalie Braden Holtby. Holtby stopped just 14 of 18 shots before being pulled five minutes before the end of the second period.

Gagne, who spent his first ten seasons in Philadelphia, scored 3:55 into the second period for his first goal of the season, after scoring zero in 11 games with the LA Kings. The tally was Gagne’s 260th as a Flyer, and it gave the Flyers a commanding 3-0 lead. Max Talbot’s goal 11 minutes later made it 4-0.

The Flyers play again Saturday when the Ottawa Senators travel to Philadelphia for a noon game at the Wells Fargo Center, where the Flyers are 6-3-1 this season. The team’s 21 points puts them
at third in the Atlantic division behind the 10-5-4 New Jersey Devils, who have 24 points. The Flyers have yet to reach the .500 mark this season.

Great beat ! I would like to apprentice at the same time as you amend your website, how could i subscribe for a weblog web site? The account aided me a appropriate deal. I had been tiny bit acquainted of this your broadcast offered brilliant transparent idea traktorki ogrodowe