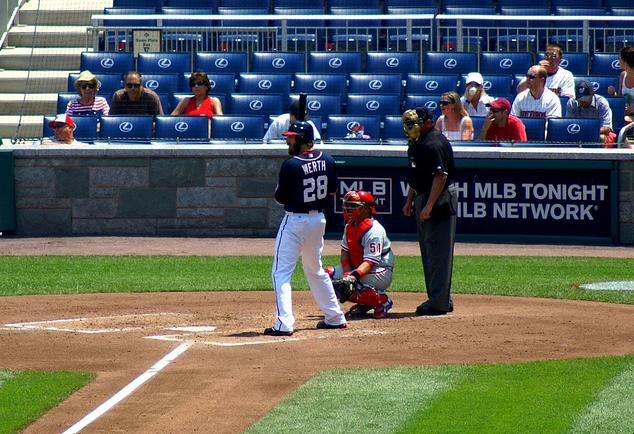 Let's face it, the NL East is probably going to be one of the best divisions to watch in all of baseball this season. The Nationals are coming off of their first ever division title, the Braves have re-stocked their outfield in the brothers Upton, and the Phillies have all of their key players returning helathy.

It's almost certain that the New York Mets and the Miami Marlins will be out of contention by Opening Day, but there is a big question that will be answered over 162 games: Who is the best in the NL East?

Former-Phillie and current Washington National Jayson Werth spoke with the Washington Post's Adam Kilgore on his team's chances on repeating a division title in 2013. With the Braves' new acquisitions and the Phillies coming back healthy, the Nationals won't have it easy en route to a repeat.

Jayson Werth was asked if considered the Braves or Philadelphia Phillies a bigger threat. Werth, the former Phillie, did not hesitate.

“Phillies,” he said. “I think everybody is writing them off. They played good in September, when they were healthy. They’re not going to roll over, that’s for sure.”

And about the Braves? “Yeah, the Braves got the Upton brothers,” Werth said. “But they lost [Martin] Prado and Chipper.”

It's kind of a good feeling to know that the Phillies are still listed as a "threat" by other teams. But the way they are viewed and the way they play are completely different. The Braves will most likely take offense to Werth's comments, which can only heat up their own rivalry even more. For the Phillies, it can stand as a source of momentum.

The Phillies and Nationals will meet for the first time this season on May 24-26th, so there is plenty of time for more trash talking.