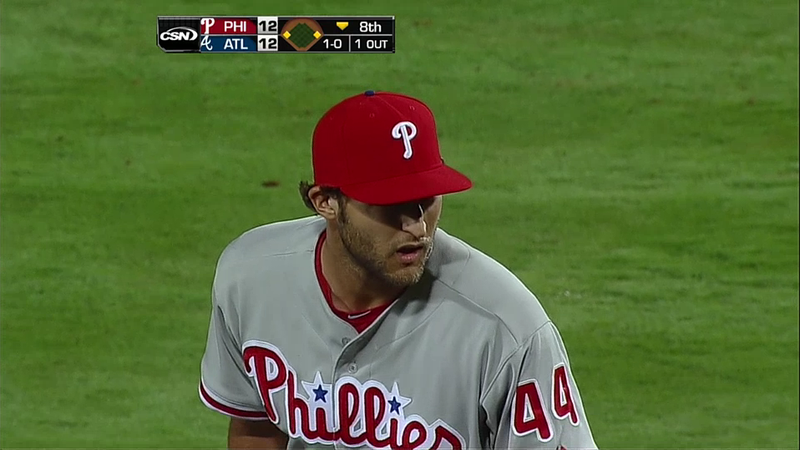 Yes, Schwimer took the loss in this game against the Atlanta Braves

Assistant general manager Jay Sartori already informed him that with the veteran relievers and other pitchers out of options on the roster he's unlikely to head north. That's just fine with Schwimer, though, who said he will have no problem reporting to Triple-A Buffalo at the start of the year. Once there, it's very possible he will be a candidate for a promotion if the Blue Jays' pitching staff suffers any injuries during the year.

Schwimer appears to be an agitator that the Phillies simply wanted to unload.  The first issue with Schwimer was when he broke roster news on Twitter before the Phillies informed players on their Major League roster that they would be sent to AAA:

Then there is the matter of Schwimer's demotion to AAA Lehigh Valley.   Schwimer at first refused to report to AAA, claiming that he was injured.  It sounds like that the Phillies did not care for the fact that Schwimer's demotion would be the reason for the pitcher to claim injury, as he did not claim to be hurt as he scuffled along.   Schwimer was eventually added to Lehigh Valley's roster but the Phillies declined to add him to the roster in September.

If Schwimer was on the major league disabled list, he could have collected a full major league salary.  If he had just taken the demotion and came back in September, he probably would have collected more money.  At first, Schwimer said that his despute through the player's association was an "open issue", but in today's National Post piece by John Lott, Schwimer all of a sudden is not supposed to comment.

The Phillies got nothing in return for Schwimer.  Let's face it: a 22 year-old class A first baseman was not on the list of things that Phillies hoped to acquire to make their team better.  He is probably just another career minor leaguer whom we never hear of.  The Phillies were probably happy to just find someone to take Schwimer off of their hands.

So of course Schwimer offered a parting shot in Lott's piece.   He's much happier now that he got out of the awful Phillies clubhouse:

“This is different,” he said with a smile on Sunday morning. “My initial impression is that it’s a lot more relaxed than the Phillies’ locker room was. Everybody’s having fun, kind of doing their own thing, happy. The Phillies [clubhouse] was a lot more kind of regimented and plan-oriented."

Lott says that the Blue Jays clubhouse is filled with a "cacophony of noisy conversations and loud music".  Maybe that is just what Schwimer needs.  Good luck to you, sir.