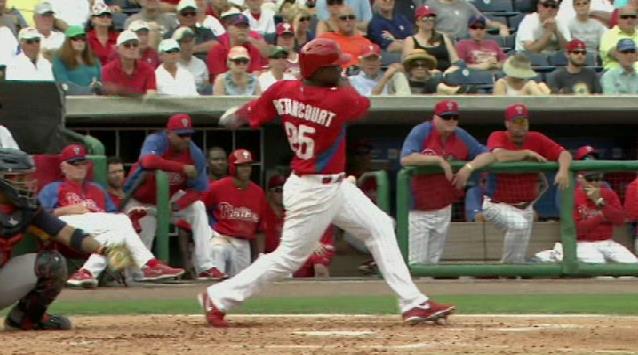 Cliff Lee looked excellent this afternoon against the Tigers in Clearwater. In two innings, Lee walked one and struck out two. He did not give up a hit.

Tyler Cloyd followed with two shutout innings of his own, walking one and striking out one.

In the bottom of the fourth inning, Ryan Howard brought home Yeniesky Betancourt with a sac fly to center field, putting the Phils on the board.

Jonathan Papelbon came in for the fifth inning and was completely shellacked. Nick Castellanos put the Tigers on the board with a two-run homer to right center. Later, Alex Avila was sent home on a single from Torii Hunter. With two men on, Miguel Cabrera hit a looooong home run, making it a 6-1 ballgame.

Michael Stutes, pitching for the first time in ten months, did not have an easy sixth inning. Stutes walked two, and allowed two earned runs on one hit, a two-run triple from Tyler Collins. 8-1 Tigers.

After a 1-2-3 inning from Phillippe Aumont, Raul Valdes allowed a run to score in the eighth inning after Dixon Machado doubled to send home Curt Casali. 9-1 Detroit.

Valdes stayed in for the ninth inning, and gave up a solo homer to Kevin Russo which made it a 10-1 ballgame.

The Phillies' offense did a whole lot of nothing this afternoon, gathering just five hits total. They are now 0-2 with one tie (Feb. 24th's game against the Tigers).

Tomorrow at 1:05, the Yankees will pay visit to the Phillies for the first time this spring. Kyle Kendrick will take the hill for the Phils.