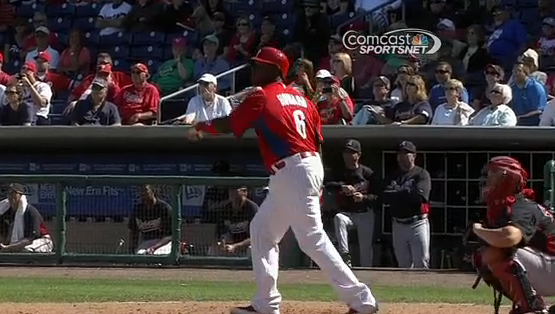 More positive news out of Clearwater today as the Phillies downed the Atlanta Braves 10-5.    On the mound, Cole Hamels was sharp with three strong innings in which he only allowed one unearned run.   Offensively the Phillies saw continued offensive progress from Ryan Howard as he belted his first Spring Training home run.

The Phillies chased Braves starter Paul Maholm after two and two-thirds innings after five earned runs with six hits and two walks.  The Phillies also got two off of Craig Kimbrel and another three of of Cristhian Martinez.

Ben Revere's leadoff debut for the Phillies went very well.  Revere was on base three of the four times he went to the plate with two hits and a walk.    Revere likely will get many chances to lead off this Spring, considering shortstop Jimmy Rollins is headed to the World Baseball Classic.

Some other positive notes to come out of today's game:

The Phillies are back in action tomorrow against the Yankees in Tampa.