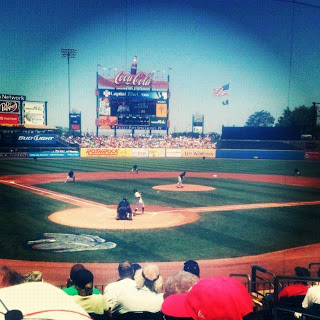 Morning Call IronPig's beat writer Jeff Schuler wrote in his piece about the team that the Phillies were supposed to release minor league rosters yesterday, but didn't. So they may release them anytime today. The other big news of the overnight was the release of Austin Hyatt, a starter for Reading and Lehigh Valley over the last two years. It is apparent to me that the Phillies did not see a move to the bullpen here as being worth it, and he was better off being a starter elsewhere.

With that said, this may be my last crack at it, but here's my IronPigs prediction:

I think this is close to done. Cochran may not be safe if he doesn't win the fifth starter job, and Orr could possibly play short over Martinez. Either way, I don't see the actual roster changing.
So then, Reading:
And down the A Ball level, no changes: