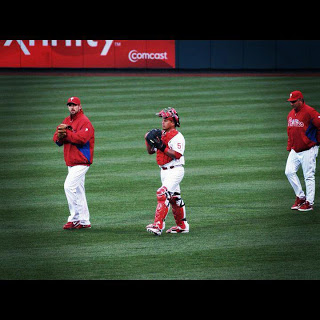 Preview:
Two more totally meaningless games in Philadelphia will complete the exhibition schedule. Presumably, Cliff Lee will throw Friday for some period of time, as will Kyle Kendrick and John Lannan on Saturday, though not even ESPN is listing any pitching names for this, let alone the Phillies. The main items of interest in these games are whether or not Ben Revere keeps hitting lead-off, and which corner Dom Brown lines up in for the outfield. The last roster battles appear to be Aumont-Stutes, and Orr-Inciarte. Both are likely to be settled by Saturday afternoon at the latest. For Toronto this is the last stop before a season where they are the trendy pick in the AL East right now. They did just give J.A. Happ a rotation spot, and ink him to an extension though, so it's tough to call them a favorite.