Eagles Flyers Phillies Sixers About Us Write For Us
Minor League Rosters Come Into Focus
Roll Out The 2013 Predictions: Phillies On The Upswing 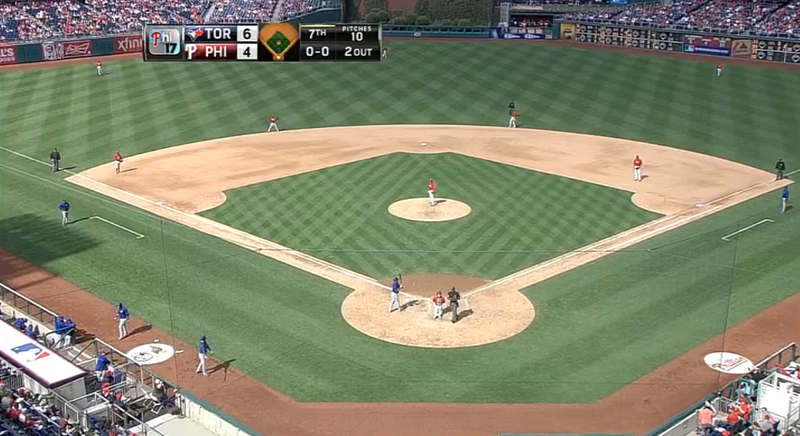 The Phillies and Blue Jays squared off one more time this afternoon in the final game of spring training. Kyle Kendrick took the hill for his team with Josh Johnson on for Toronto.

The Jays jumped ahead to an early lead in the top of the first after Jose Bautista went yard to left field for a solo home run.

After three, Kendrick's afternoon was done. He was charged with five earned runs on six hits, walking one and striking out four.

In the bottom of the third, John Mayberry put the Phils on the board with a solo shot to left field. Later in the inning, Erik Kratz was able to score on a sac fly from Chase Utley. 5-2 Jays. With Ben Revere and Jimmy Rollins on base, Michael Young made it a 5-4 game with a two-run double to deep right field.

John Lannan came in for three innings of work and allowed one run to score on three hits, walking none and striking out five. The run came from a groundout from Colby Rasmus which sent Bautista home. 6-4 Jays.

Chad Durbin pitched a scoreless seventh, walking one. Antonio Bastardo replaced him in the eighth and after allowing two hits, he loaded the bases with a walk. With one gone, the Jays scored one on a sac fly from Emilio Bonifacio. Zach Miner came in with two outs to finish the inning. 7-4 Jays.

Mike Nickeas doubled in the top of the ninth to score two runs, making it 9-4 Toronto. Later, Nickeas scored on a single from Adam Loewen. 10-4 ballgame.

Unfortunately the Phils could not come back in the bottom of the inning, wrapping up 2013 spring training with a loss to the Jays.

The Phillies have the day off tomorrow in preparation for Opening Night at Atlanta on Monday. Cole Hamels is your Opening Day starter at 7:05!

Well, there's always a next time. That was life was about. Who knows what will happen in the league.