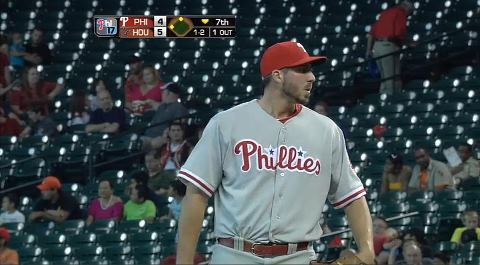 The Phillies made five roster cuts this morning. Tyler Cloyd, B.J. Rosenberg, Tyson Gilles, Sebastain Valle, and Mauricio Robles were all optioned to minor-league camp. One player, who was not cut and is still in Phillies' big-league camp is pitcher Phillippe Aumont.

In the emergence of the World Baseball Classic brawl between Team Canada and Team Mexico, which included four Phillies (OF Tyson Gilles, P Phillippe Aumount, IF Pete Orr, C Sebastian Valle), a lot of talk has been going on surrounding what went on. Except for a tweet regarding teammate Sebastain Valle (which has since been deleted), Team Mexico's catcher on the field during the brawl, Aumont has not shared his entire story – until today.

Aumont was not involved in any physical melee during the brawl, unlike OF Tyson Gilles, but did have a first hand experience of what happened.

“It was pretty intense,” he said this morning at Bright House Field. “It was the first time I’ve ever been in an actual brawl where people were going to town on (each other). … I was trying to stay out of trouble. I was more frozen than anything else when I got there. When I got there everything kind of separated. I looked out and tried not to get sucker punched or anything.”

Aumont shed some light on his views of his teammate, and for a brief few minutes enemy on the field, Sebastain Valle.

“It was something that at the moment I was frustrated about and, like I said, it was a heat of the moment thing,” he said. “I thought about it and it was not right for me to say that.”

Aumont went on to say that he doesn't feel any further hostility is necessary.

“It’s not like I’m going to look at him and try to fight him,” he said. “The guy is my teammate. On the field it was different. What he did I thought was a little low, but that’s none of my business. He’s the one who deals with that.”

Aumont is doing the respectible thing right here. Dropping the drama and focusing on the more important picture: landing a job in the Phillies' bullpen. Aumont has made two appearances for the Phils in Grapefruit League games, collecting a 4.50 ERA (1 ER in 2 IP). Aumont had a bad outing agaisnt Italy, but rebounded with a scoreless inning against Team USA on Sunday.

As for the upcoming season, Aumont feels confident with his chances this spring and is a good sport regardless the outcome.

“I feel good,” he said. “To me, they are still my friends, still my boys. I’m just going to go out and do my thing. Whatever happens with them, good for them. I definitely want to see them do well. If I don’t perform well, then they deserve it more than I do. If I do well, obviously I want to be a part of it. But I’m not going to compare myself to others, because that’s where you get in trouble. I’ll do my own thing and cheer for them. There are 10 more guys and just seven more spots, but obviously I’m going to cheer for them. The goal is to win a championship.”