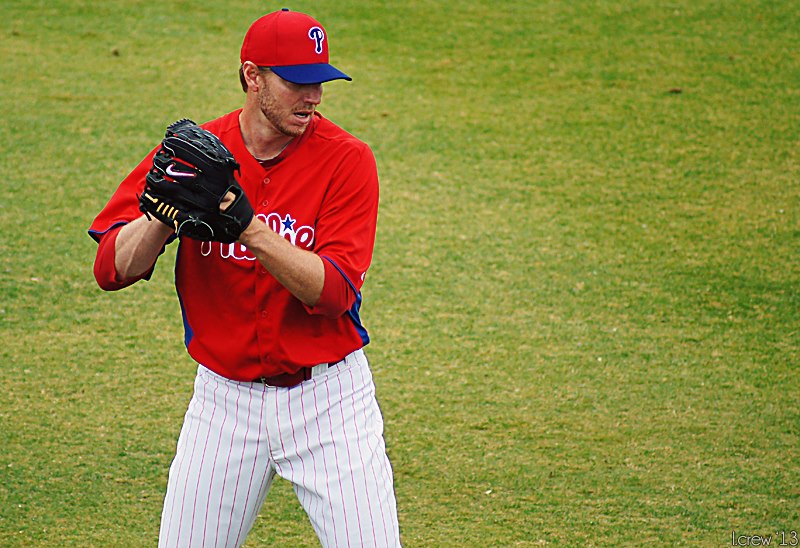 I goofed yesterday when I said that yesterday's game was the final spring training game in Florida. I mis-read the schedule and thought the On-Deck Series started today. My bad. The Phils ended up winning nonetheless, so that's good news.

Anyway, today is really the last day that the Phillies will be in Clearwater and it's a pretty big deal because not only is Opening Day arriving in five days, but Roy Halladay (2-1, 6.75 ERA) is making his last start before the regular season. Halladay has had an interesting spring full of surprises: a dead arm, a stomach bug, and extreme decrease in his velocity. Although he says he is "physically ready to go", it's certainely going to take a lot to prove himself healthy.

Halladay made his last start on Saturday against the Toronto Blue Jays' Triple-A campers. Halladay faced 18 batters and 11 of those reached base. He allowed three runs in four innings and struggled with his velocity, as most of his pitches fell below 90 MPH. He did, however, manage to strike out three batters. Halladay last made a start with the big league club on March 17th against Baltimore, where he lasted only an inning before being pulled for a stomach virus. Halladay has allowed twelve earned runs in 16 innings of work over six starts (including his minor league outing). It's tough to say what is actually going on with Halladay because what we as fans see from him opposes what sees from himself.

Opposing Halladay and the Phils will be RHP Brandon Morrow (0-2, 7.80 ERA), who is making his sixth and last start of the spring. Morrow has struggled with locating his pitches and his command and he has paid for said lack of location. In 15 innings of work Morrow has allowed 13 runs, 11 earned in five starts. In Morrow's last outing, against Atlanta on Saturday, he lasted 5 1/3 innings, allowing five earned runs on eight hits. Morrow surrendered a walk and struck out two in the no-decision outing. Morrow is in line to start the second or third games of the regular season against Cleveland next week.