Timonen ties it, Fedotenko wins it as Flyers rally past Caps 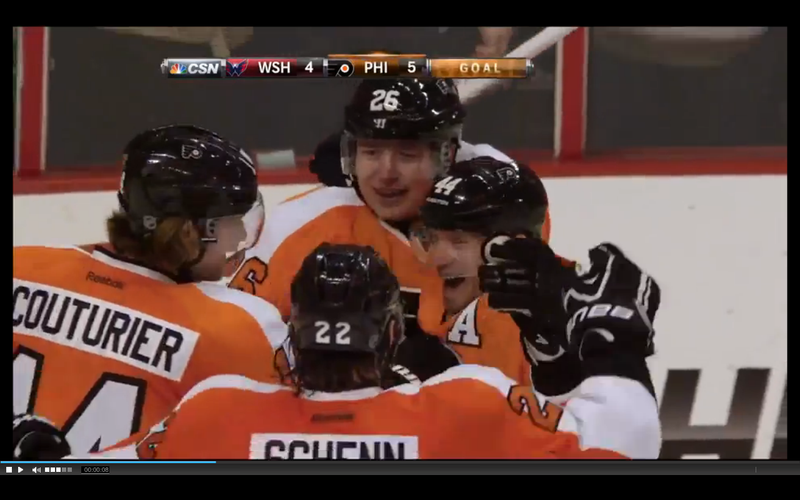 Ruslan Fedotenko was the hero but Kimmo Timonen was the star, leading the Flyers with four points in their 5-4 overtime win over the Capitals.

Their playoff hopes may be on life support, but don't pronounce the Flyers dead just yet.

10 seconds away from suffering another devastating loss, Kimmo Timonen scored to tie the game and force overtime. Less than two minutes into the extra session, Ruslan Fedotenko scored his second goal in as many days to give the Flyers an emotional 5-4 win over the Washington Capitals.

The Capitals took the first seven shots on goal in the game, including one that beat Ilya Bryzgalov. A shot from the point by Marcus Johnansson was deflected by Nicklas Backstrom at 4:29 of the first.

The Flyers answered six minutes later. Zac Rinaldo's hard work on a shift ended with a nice touch pass in front to Max Talbot who buried it to tie the game.

With just over five minutes left in the first, a soft lead pass from Claude Giroux found Matt Read behind the defense. He beat Braden Holtby with a wrist shot on a breakaway to give the Flyers a 2-1 lead.

After 18 minutes of scoreless play in the second, Mike Green would tie the game on a breakaway of his own out of the penalty box.

Early in the third, a clean hit by Steve Oleksy on Giroux led to a fight between Oleksy and Jake Voracek. Voracek received 19 minutes of penalty time including four minutes of power-play time for the Capitals.

Johansson scored just over a minute into the first power play to give the Caps the lead. Just 26 seconds later, Alex Ovechkin scored to make it 4-2.

The Flyers turned on the energy late in the period. First a power play with 7:26 remaining in regulation led to a goal just 16 seconds later by Giroux.

With time running out in the third, the Flyers showed incredible desperation just to earn a point. With 9.5 seconds remaining in regulation, a shot by Kimmo Timonen found the back of the net to tie the game.

Just 1:34 seconds into overtime, Ruslan Fedotenko would cap the comeback against the Caps, scoring to give the Flyers the win.

Despite allowing four goals, Bryzgalov was solid in net playing in back-to-back games two days in a row. He made several huge saves in the first to keep the Caps off the board.

The real stars for the Flyers were Giroux and Timonen. Giroux had a goal and two assists. Timonen's huge goal at the end of regulation was his fourth of the season. He also added three assists for a four-point game.

For once, the Flyers treated the final minute of a game they were trailing with urgency. They fought for the first point then earned the second. Now they sit just two points out of eighth place in the Eastern Conference.

The playoffs are not a pipe dream. They are still a longshot to make the playoffs. But they are not dead yet and the effort they gave in tonight's game is the type they need to give for the rest of the season.

Additionally, there was energy in the Wells Fargo Center tonight. It should make Wednesday night's tilt against the Montreal Canadiens one with a playoff atmosphere.