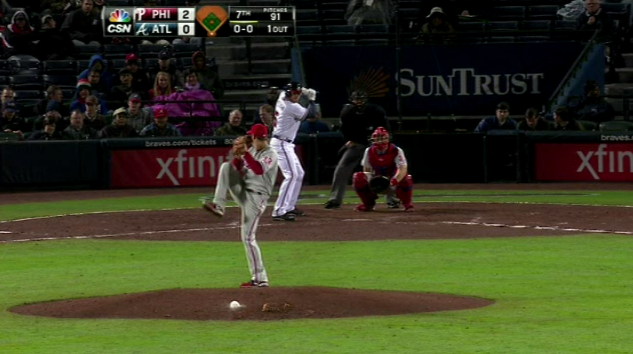 A chilly, rainy night in Atlanta turned out to be a dominant night for the Phillies in what would be their first win of the 2013 season. Cliff Lee took the mound against Kris Medlen for his first start of the year.

The Phillies got the ball rolling first in this ballgame. In the top of the second, the bases were loaded with nobody out for Ben Revere. Revere grounded one up to Dan Uggla at second base, Uggla tagged the base to get Cliff Lee out, but bobbled the ball leaving Revere safe at first, and Laynce Nix scored safely. Later in the inning, Erik Kratz was able to score on a sacrifice fly from Chase Utley. 2-0 Phils.

As for the Braves, zilch. Cliff Lee was breezing through the Braves' lineup, allowing just two hits through eight innings, walking none and striking out eight.

In the bottom of the ninth, Jonathan Papelbon came in to relieve Lee and close out this ballgame. Papelbon sealed the deal with two strikeouts, sending the Phillies to a 2-0 shutout.

The Braves took two of three in the opening series of the 2013 season, but the Phils ended it on a very good note. Tomorrow at 4:05, the Royals and Phillies will square off for Opening Day at Citizens Bank Park. Kyle Kendrick will take the mound for the Phillies, Wade Davis for Kansas City.