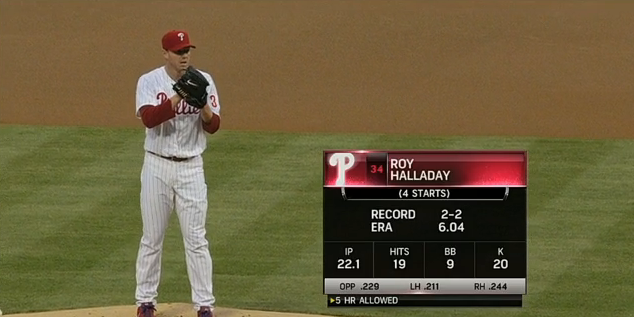 The Phillies are coming off of a three-game sweep over the New York Mets this weekend, their first sweep of the year. With the offense surging, a day off yesterday certainely doesn't prove good timing, but as the Phillies enter tonight's ballgame at 12-14 they are looking to end the month of April on a winning note. The Phillies are coming off of a 5-1 win Sunday where Cole Hamels earned his first win of the season. Backed by the bats of Ryan Howard, Chase Utley, and Domonic Brown, the Phillies scored 18 total runs this weekend, the most in a single series so far. Tonight the Phillies will open a two-game set in Cleveland as Roy Halladay (2-2, 5.08 ERA) and Zach McAllister (1-3, 3.52 ERA) take the mound.

Roy Halladay continued to shine in his last outing, dominating the Pirates over six innings of work. Doc allowed just one run on one hit while striking out eight batters to take his third-consecutive quality start. Despite taking the no-decision due to the bullpen blowing the lead and the game, Halladay has drastically changed his demeanor from his first two starts of the year. Over his last three, Halladay has a 1.71 ERA (4 ER in 21 IP), but his main problem is getting ahead of hitters in counts. Halladay has thrown a lot of pitches in his last two starts, 109 in seven innings against St. Louis and 95 in six innings against Pittsburgh this past Wednesday. Halladay will be taking on a red-hot Indians lineup, one that has scored 19 runs in their past two games. In his career against Cleveland, Halladay has a 6-2 record with a 3.52 ERA (31 ER in 79 1/3 IP).

Zach McAllister is coming off of a 5 2/3 inning bid on Wednesday against the Chicago WhiteSox. McAllister allowed three earned on five hits while taking the loss. Many of McAllister's baserunners came by way of base-on-balls, five to be exact. McAllister struck out four as well. With McAllister coming off two losses, he looking to turn it around back at home, where he is 1-1 with a 3.18 ERA this season. In his last three, McAllister owns a 3.71 ERA (7 ER in 17 IP). Tonight will be the 24-year-old's first outing against the Phillies.

Delmon Young will make his Phillies debut tonight as he takes the DH spot in the lineup. Young batted .367 (11-for-30) in seven games between AA-Reading and AAA-Lehigh Valley. Young replaces Ezequiel Carrer, who has been DFA'd, a on the roster.