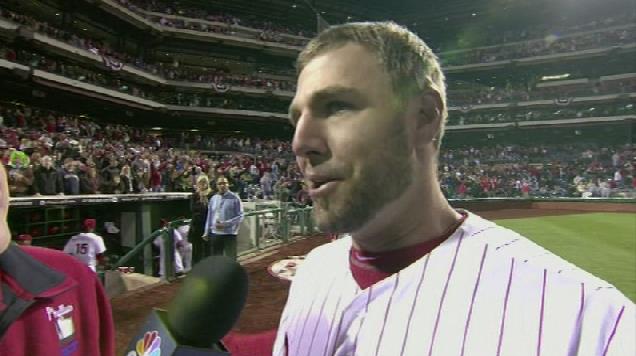 John Lannan made his Phillies debut tonight at Citizens Bank Park against the Kansas City Royals. In game two of this series, Lannan looked sharp while the Phillies lineup seemed to be up to a whole lot of nothing.

Through the first four innings of this game, John Lannan was perfect. Luis Mendoza was nearly perfect, he gave up just one hit through four, a single to Michael Young in the second inning.

In the fifth, the Royals put up two runs. Lorenzo Cain scored on a groundout from Miguel Tejada, then Elliot Johnson singled to bring home Jeff Francoeur.

In the bottom of the inning, the Phils cut the Royals' lead in half after Ben Revere singled to bring home John Mayberry from second.

Tejada brought home another run in the top of the seventh after he doubled to plate Francoeur. After seven, Lannan's night was done. His line: 7 IP, 5 H, 3 ER, 0 BB, 5 K.

Mike Adams came in for the eighth inning and allowed one hit and struck out one. Through eight, the Phillies had collected just two hits.

Greg Holland came in for the Royals to close it out, and walked Chase Utley, Ryan Howard, and Michael Young to start the inning. Domonic Brown and John Mayberry struck out to follow, leaving it to Kevin Frandsen.

With one, swift swing, Frandsen lined one to right-center, splitting the gap and clearing the bases with a walk-off double. Phillies win this one, 4-3.

Tomorrow, this series will wrap up with Cole Hamels and James Shields squaring off at 1:35.