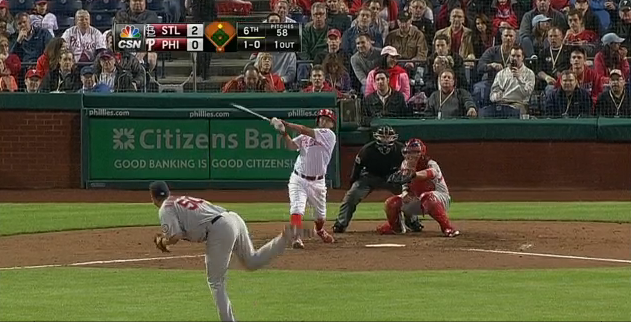 After a three-game sweep from the Cincinnati Reds, the Phillies started a blank slate tonight at Citizens Bank Park against the Cardinals. Cole Hamels and Adam Wainwright squared off tonight.

The Cardinals jumped ahead to a 2-0 lead in the top of the fourth after Yadier Molina doubled to score Matt Holliday and Allen Craig.

In the bottom of the sixth, the Phillies tied the ballgame with an RBI double from Freddy Galvis, then a single from Chase Utley.

It became a game of cat and mouse between the Phils and Cards. St. Louis took a 3-2 lead in the top of the seventh with an RBI single from Pete Kozma. In the bottom of the inning, the Phils tied it up again thanks to a single from Erik Kratz which brought home John Mayberry.

Mike Adams came in for the eighth inning and allowed the Cards to take a 4-3 lead after Carlos Beltran homered to left field.

In the top of the ninth, Jonathan Papelbon came in and pitched a 1-2-3 inning, sending it to the bottom of the ninth with the Cardinals up, 4-3.

The Phils threatened with men in scoring position and two outs, but Galvis ended it with a groundout to second base.

Tomorrow night at 7:05, Roy Halladay will take the mound against Jaime Garcia.