Howard, Young, and Mayberry Homer in 8-3 Victory Over Mets 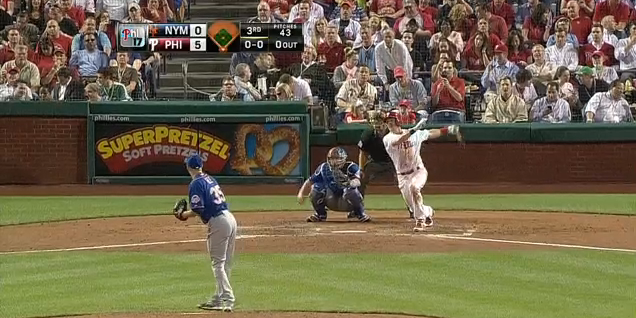 An ugly loss yesterday promised a brighter start in tonight's game with Cliff Lee on the mound against Dillon Gee and the Mets.

After a scoreless first, the Phillies put up four runs in the bottom of the second. John Mayberry doubled to score Michael Young and Domonic Brown, both had singled to get on base. Later, Cliff Lee singled to bring home Mayberry. Lee came home on an RBI double from Jimmy Rollins.

The bottom of the third was in interesting one for the Phillies. Ryan Howard kicked off the inning with a solo opposite field home run, his first of the year. Michael Young followed with a solo homer to right field, his first of the year, and as a Phillie. John Mayberry didn't miss a beat and sent one just over the wall in the corner of left field, making it a back-to-back-to-back homer inning. 7-0 Phillies.

In the top of the fourth with David Wright on base, John Buck mashed a homer to center field, making it a 7-2 ballgame. In the bottom of the inning, Michael Young brought the Phils up to 8-2 with an RBI triple. This made Young just a double shy of the cycle.

Jordany Valdespin tripled in the top of the fifth, and was able to score on a passed ball. 8-3 Phils.

Cliff Lee was looking at sharp as ever tonight, and would go 8.2 innings allowing just three earned runs on eight hits, walking none and striking out six. Mike Adams came in for the last out in the top of the ninth and closed it out and struck out Ruben Tejada.

Tomorrow night, this series will go to the rubber match with Kyle Kendrick on the mound against Jeremy Hefner at 7:05.