Eagles Flyers Phillies Sixers About Us Write For Us
Doc Looks To End April On High Note; Delmon Young Makes Phillies Debut Against Indians
One More Stop Before Cooperstown For Jim Thome? 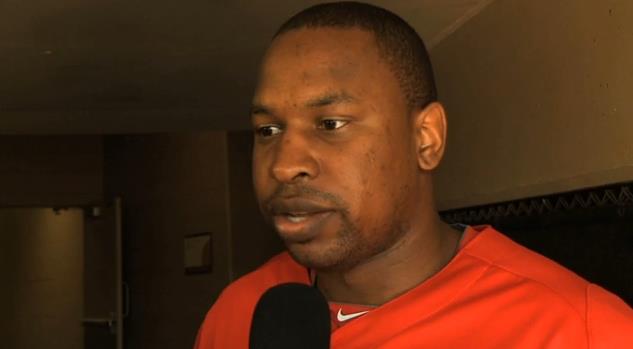 A fatter version of the current Delmon Young

It was supposed to be an entertaining game. The Phillies were making their first appearance in Clevland since 2007, and Roy Halladay was going to continue his three-game hot streak. However, he reverted back to the beginning of the season, and Zach McCallister looked dominant. He held the Phillies to just two runs, and the Indians bats erupted for 14. If you can stomach it, here is the full game recap.

McAllister kicked things off with a 1-2-3 top of the first inning. Mark Reynolds made a fantastic play at first base to record the third out. Doc gave up a single and stolen base to Jason Kipnis, who was brought home on a monstrous home run by catcher Carlos Santana. Halladay would then walk the somehow-still-playing Jason Giambi and give up a second homeun to Mark Reynolds to center field. 4-0 Indians.

In the top of the second, Delmon Young made his Phillies debut by pounding a solo homerun to right-center field. Cleveland went quietly in the bottom half. 4-1 Indians.

A single by Kipnis and a walk to Santana led to the only baserunners for either team in the third inning. The Phillies would go quietly once again in the fourth. The Indians would not.

Mark Reynolds singled off Halladay to begin the inning, and Lonnie Chisenhall crushed the Indians' third home run of the game. Two singles and two outs led to Asdrubal Cabrera, who promptly singled in two more runs. It would be the final blow to Roy Halladay, who was lifted for reliever Chad Durbin. A Santana strike out ended the bloodshed. 8-1 Indians.

Delmon Young got hit with a pitch and Domonic Brown walked in the top of the fifth before the next three Phillies would make outs. Sad. The Indians bats continued to dominate. Giambi doubled to lead it off, and was followed by two ground outs. Ryan Raburn quickly ended that trend by homering off of Durbin. A single by former Red Drew Stubbs was quickly met with the Indians' FIFTH 2-run homerun of the game, this time by Michael Brantley. 12-1 Indians

McCallistar continued into the fifth, looking very impressive thus far. With two outs in the inning though, Chase Utley showed some pop, driving a ball out to deep right-center. Delmon Young not only got his second hit of the game, but also managed to trend on Twitter: 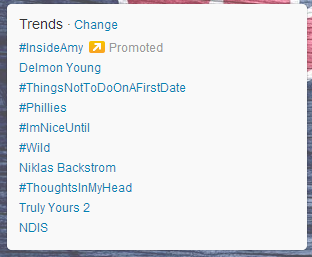 It was at this point in the game where Charlie Manuel seemed to give in, as Freddy Galvis and Kevin Frandsen came on to play for Jimmy Rollins and Chase Utley, respectively. Raul Valdes came in and held the Indians to no runs. The joke of a game continued perfectly, with Ben Revere hitting into an inning-ending double play.

After McAllister left the game, Nick Hagadone came in and allowed two straight walks to Galvis and Michael Young. However, a double play and a groundout ended any and all threats.

Things only got worse in the eighth, when three of the first four batters reached base against Phillippe Aumont. However, a double play ended the threat, and the Indians would not score more than two touchdowns.

As they should have, the Phillies ended the game with a 1-2-3 top of the ninth. Thankfully, the beat-down was over.

This was just stupid awful. The broadcast team focused a majority of the game constantly going back to a woman in the stands that was almost hit by a foul ball. I would like to go on a lengthy rant, but they did just come off a sweep, and you probably have no interest. You're rarely, if ever, going to be able to overcome SEVEN homeruns by the opposing team, especially when more than half of them are two run shots. Roy Halladay looked terrible, and the concern has only escalated for both his health and well-being. Overall, it was just a mess of a game.

The good news is, Delmon Young looked surprisingly formidable at the plate. We'll get a real taste of his ability when he plays right field tomorrow. Speaking of tomorrow, Cliff Lee will take the mound at Progressive Field and face the Indians for the first time since he was traded to the Phillies in 2009. He will match up against Trevor Bauer, a first round pick, third overall, by the Arizona Diamondbacks in the 2011 MLB Draft. Bauer has been impressive in Columbus, the Indians' AAA afilliate. However, his stats have not transferred well to the majors to this point. For the Phillies sake, hopefully this trend continues.