Kendrick and Bailey Dazzle in Pitcher’s Duel, Scoreless Ballgame Suspended Until 5:30 Tomorrow Due to Rain 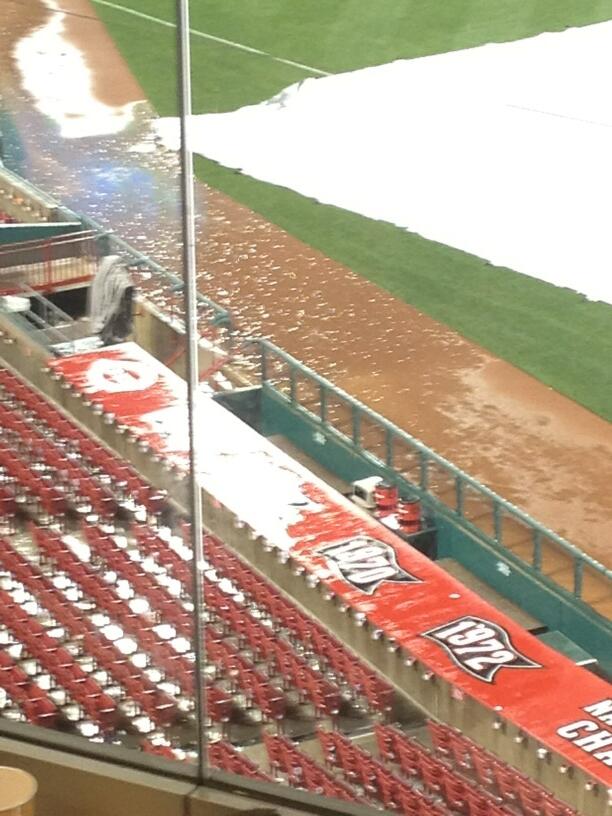 Homer Bailey and Kyle Kendrick were nothing short of spectacular tonight. After an hour and twenty minute rain delay in Cincinnati, the two starters squared off, and the duel bagan.

Much like last night's ballgame, the Phillies' offense was nowhere to be found. Through EIGHT innings, the Phils had gathered two hits: a single from Michael Young in the second, and a single from Chase Utley in the fourth. Bailey went for eight innings tonight, striking out ten, a career high.

Kendrick was just as dominant against the Reds. Through seven innings, Kyle had allowed just two hits while walking two and striking out four. He tossed 106 pitches tonight, 67 for strikes.

Antonio Bastardo tossed a perfect bottom of the eighth for the Phils, striking out one. Aroldis Chapman came in for the second straight night and struck out two.

Heading into the bottom of the ninth, the rain once again forced this game into a delay. Only, this one would suspend the ballgame until tomorrow evening at 5:30.

Tomorrow night at 7:10, John Lannan and Mike Leake will wrap this series up.

Oh, and in case you were wondering:

Tomorrow's resumption is not an extension of bark in park promotion. No dogs, Reds say