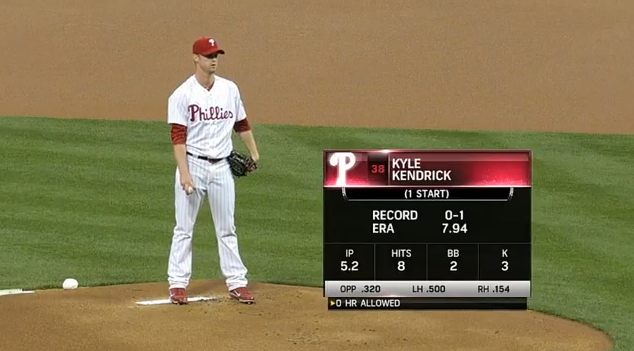 There's no doubt that last night's ball game was a tough-luck loss for the Phillies. Cliff Lee dazzled through six innings before allowing two runs in the seventh inning. With the Reds in control, the Phillies struck back with a Chase Utley pinch-hit two-run home run. With Lee off the hook for the loss, the Phillies looked as if they could pull one out and keep the game going, but in the bottom half of the 8th inning the Reds struck back and took a 4-2 lead. They would go on to win the ball game and close out the first game of this three-game set. Tonight, Kyle Kendrick (1-1, 5.40 ERA) will take on Homer Bailey (1-1, 5.73 ERA) in game two.

Kendrick pitched efficiently on Wednesday against the Mets, allowing two earned on eight hits while striking out six in six innings. Kendrick walked two as well in the quality start. It was enough to get Kendrick his first win of the year as the Phillies' bats broke out early, supplying a seven-run lead. It was a much better outing for Kendrick than his season debut against Kansas City, where he allowed five earned through 5 2/3 innings. Kendrick made one start against Cincinnati last season, a losing effort despite throwing six innings and allowing two earned runs. In his career Kendrick is 3-2 with a 5.00 ERA (20 ER in 36 IP) against the Reds.

Homer Bailey is looking to rebound from a horrific start last Wednesday at the hands of the Cardinals. Bailey was hit hard, allowing seven earned on nine hits through five innings. Struggling with control in his past two starts, Bailey has walked six batters compared to eight strike outs. Bailey made one start against Philadelphia last season. Bailey tossed 6 1/3 innings while allowing three runs on seven hits, resulting in a no-decision. In his career against Philadelphia, Bailey owns an 0-3 record along with a 5.29 ERA (19 ER in 32 1/3 IP).