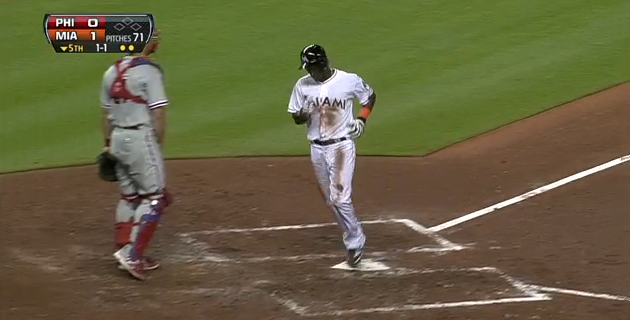 Cole Hamels was looking to get out of his funk this evening against the lowly 1-9 Marlins. Jose Hernandez was coming off of a very strong outing and looked to keep his hot streak going.

Through four innings, Hamels was working with a no-hitter. However, Adeiny Hechavarria ruined the bid in the bottom of the fifth with a triple. He was later able to score on a single from Jose Fernandez.

The Phillies finally put a run up on the board in the top of the seventh after Erik Kratz grounded into what should have been a double play, but Donovan Solano tossed past first base and into the camera well, allowing Domonic Brown to score.

After six innings, Hamels' night was done. He allowed one run on three hits, walking three and striking out five. Antonio Bastardo came in for the seventh inning and it was a perfect 1-2-3 inning.

Mike Adams came in for the second straight day and struck out two in the eighth inning, looking as sharp as ever.

The Phillies went with the same relief effort as last night: Bastardo, Adams, and Aumont. In the bottom of the ninth, Aumont had men on the corners with one out when Chris Coghlan singled up to Chase Utley who bobbled the ball which allowed Placido Polanco to score from third. Marlins win their first game at home and second on the season, 2-1.

Tomorrow afternoon, Roy Halladay will face Kevin Slowey and the Marlins at 1:10 in the rubber match game of the series.