The Need For The Seed: Flyers vs. Islanders Preview.

Now the Flyers are not kidding themselves, the need to win this game against the 8th seed Islanders is of Defcon 5 proportions. The Flyers are trying to avoid thier first playoff miss since 2007 and ironically thats the last year the Islanders made the playoffs. The Islanders have gone 6-2 over thier last 8 including a 4-3 win over the Flyers on March 28th. The Isles are doing exactly what a team needs to do on the stretch run, they are on fire. 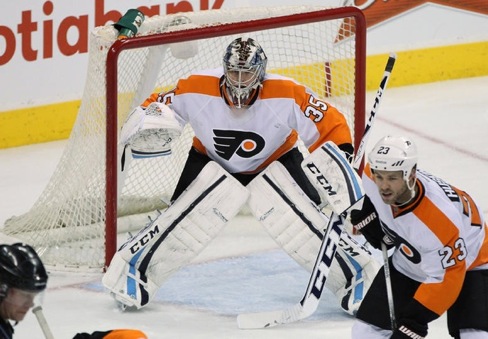 Now the most intriguing story of the night is the fact that newly acquired goalie Steve Mason will get the start rather than workhorse Ilya Bryzgalov. The last time Ilya did not start was January 27th when now Columbus Blue Jackets goalie Michael Leighton let in 5 goals against the Tampa Bay Lightning. Bryzgalov let in 4 his last game against the Jets including 2 in :30 seconds and all 4 came in the second period. He was then pulled in the 3rd period for the backup and now starter Steve Mason.

Mason in 3 games against the Isles is 2-0-1 with a .943 save percentage and 1.65 goals against average. He looked fairly well in his 3rd period against the Jets as he only faced 9 shots and was tested somewhat in his 20 minutes but he didn't let in anything. More importantly he got some confidence and saw some pucks in his first game since March 29th. Now let's see if he can parlay that into 60 minutes and gain more confidence and be the Rookie Of The Year goalie he once was and backstop the Flyers for years to come.

Now the Flyers need to show that they are the team that drubbed this team 7-0 earlier this season and not the team that look defeated against the Jets. The Flyers are 5 points out of the playoffs with 10 games to go. They have 2 more meetings with the Isles including tonights matchup at the Nassau Coliseum. The Flyers not only need to punish thier opponents and win every game to ensure thier 8th seed spot they need to stay there. They also need a little help with losses by the 4 teams between them and the 8th seed.

The Isles are feeling it and on a roll right now. Guys like Kyle Okposo and his line are on fire as Kyle has 2 goals and 8 points in his last 12 games willing his team twords the playoffs. His linemate Frans Nielson has points in 4 straight including a goal and four assists. The Flyers will have a rag tag defense keeping an eye on these "hot hands" as Braydon Coburn(Shoulder), Andrej Mezjaros(Shoulder), and now Nicklas Grossman(Concussion) will be absent for the game.

Hartnell said,"You always know you're going to get chances, you just have to capitalize on those opportunities," but i don't mean to be a downer but the window is closing and the chances are dwindling. Claude Giroux understands the urgency as he said,"It's not the position we want to be in right now, but at the same time we have to just have fun with it, come back and make the playoffs. The whole thing when we went to the Cup was us winning that last regular season game. We had adversity and we went through it. It's a big game for us." He understands the adversity that's laid before him and he needs to have a "The Shift" type performance and energy to will this lackadasical team to the playoffs and maybe beyond.

View All Posts By Mike Battista

View All Posts By Mike Battista