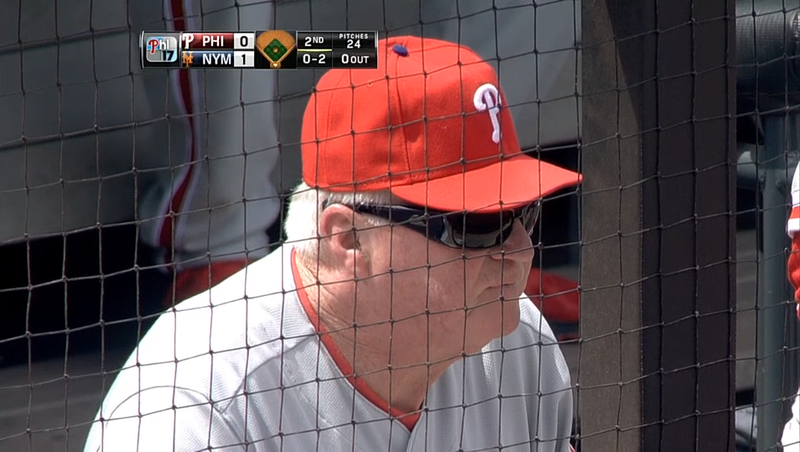 During last night's game against the Boston Red Sox and in preceding weeks, Phillies Manager Charlie Manuel made some moves that appear to show his displeasure with some  of the players General Manager Ruben Amaro Jr. has given him to use.

Case One: Michael Martinez
The Phillies added infielder Michael Martinez when second baseman Chase Utley went down.  What was the reason we were given?   One, they wanted another shortstop if Freddy Galvis is playing second base and that Martinez was (say what?) fast and could pinch run.

Two side notes: When the Phillies signed Kevin Frandsen, he was the Iron Pigs starting shortstop, so he could certainly play shortstop in a pinch.  Additionally, Iron Pig Pete Orr is probably the fastest player the Phillies have in AAA or the majors.

Given Michael Martinez, Manuel did what the company line was: he pinch ran.   So, out of the game went albatross Delmon Young, and in came Michael Martinez to run.   He did score on a subsequent Domonic Brown double, but was quickly removed from the game in favor of John Mayberry.  We have seen no sign of Michael Martinez since, and he has not recorded an at bat with the Phillies in

Case Two: Delmon Young
Delmon Young – the .222 hitting DH that occupies right field during most games that are not interleague away games – is also not a favorite of manager Charlie Manuel.

During last night's game against the Boston Red Sox, Young got a hit.  It was a rare sight at Citizens Bank Park, where Young is hitting .138.  It was the sixth inning.  At that point, Manuel replaced Young with John Mayberry to run.  (No, he did not pinch run with Martinez this time, and Mayberry ended up playing the key late innings.)

But alas, the manager is starting Delmon Young, like the general manager says to do.

I would not be shocked if when Michael Young returns from the bereavement list that infielder Cesar Hernandez stays and Michael Martinez goes.   Last night Manuel showed he has no fear in using Hernandez.  Despite arriving after the game began, Hernandez was Manuel's pinch-hitter and stayed in the game at second base.  No sign of Michael Martinez.

We now know that Chase Utley will be out a little longer than expected.  There would be plenty of at bats still for Freddy Galvis and Hernandez.   Galvis could continue to spell the infielders and play some outfield (in place of Delmon Young, please) and the Phillies would be much better off.

But the manager can only do as he is told and with the players he is given.  I think through the moves Manuel is making the message is clear: Manuel does not want Michael Martinez or Delmon Young on his roster.