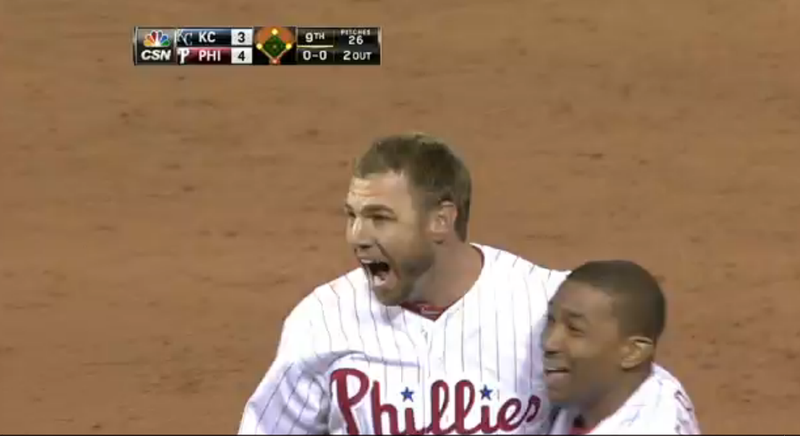 7. Delmon Young and Michael Young
These guys are professional hitters.  They have a long history of success.  Delmon Young was the MVP of the ALCS last year.  That means that he has the ability to come up really big.   He already has three home runs in just a little while so expect many more big hits.  Maybe he can even be the MVP of the ALCS again.

Michael Young has been the Phillies best hitter all season.  While other guys are popping out or flying out, Michael Young keeps hitting singles.   That means people are going to be on base to be driven in by the Phillies power hitters.

6. Jonathan Pettibone and Tyler Cloyd
These top Phillies pitching prospects are doing a great job so far and there is no reason to think they won't stop.  ESPN projects that Jonathan Pettibone is going to go 10-0.  That means he will never lose this season. ESPN also projects Tyler Cloyd to go undefeated too. If these young players never lose again, the team has a chance to win the National League East and maybe even the World Series.  This will make up for the bad play by Cole Hamels.

5. Injured Players
The Phillies right now do not have Carlos Ruiz or Chase Utley on the roster and Ryan Howard has a busted knee.   The good thing about that is that if the team can be two games under .500 with those guys all injured, just imagine about how great they can be when they came back.  When they all get healed, imagine the offense that Howard and Utley and Ruiz all can put together.  We saw them do it in 2005, 2006, and 2007 to record levels and there is no reason to think that they can't do it again.

4. Chad Durbin
The Phillies have an answer to their bullpen troubles: Chad Durbin.  Ruben Amaro Jr. said that the Durbin is a slow starter.  Well guess what? The start is over.  Just in the last week alone Durbin won a game.  Durbin's veteran contributions will help stabilize the Phillies bullpen that has suffered because of Mike Adams and Felipe Aumont.

3. Not hittin season yet
Charlie Manuel always talks about how when the weather gets warm, the Phillies really start to hit.  Well guess what?  It's not warm yet.  In fact it was like 50 degrees this last weekend.  When the Phillies were in hot Miami the other day they scored seven runs.  If they can get seven runs in hot Miami, when the temperatures improve in Philadelphia they'll start scoring seven runs a game too.

2. Prospects in the Minors
The Phillies still have some great prospects at AAA they can call up to help the team.  The team has Darin Ruf, who hit a lot of home runs last year stashed at AAA.  The news is good because they don't even need him right now since the team is doing great.  Just imagine adding one guy who is great to who the team already has.

1. Versatility of Michael Martinez
The Phillies were really lucky that no one claimed Michael Martinez on waivers last year when they released him from the roster.  Now, the Phillies have a guy who can play many positions.  He can play left field, center field, right field, shortstop, second base, third base, and he could probably play first base or pitch if they wanted him to.  Already Martinez helped win a game by running for Delmon Young.  Not many teams have a secret weapon like Martinez that they can turn to in times of need.

With the team the Phillies have and all the bonsuses, it's easy to say that it's not too late for the Phillies to come back.