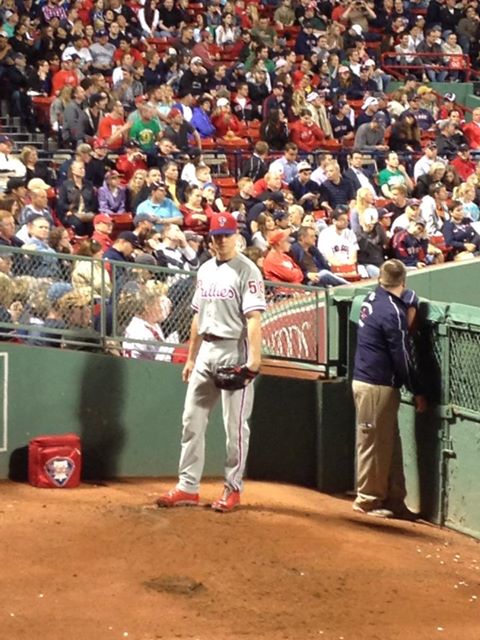 After what may have been the worst loss of the season, the Phillies needed a lot. The bullpen was heavily taxed. They needed innings from Cliff Lee.

When Lee is going good, he's one of the best in the game and tonight he was very hard to hit. He pitched eight very strong innings, allowing four hits, a run, and striking out eight. He walked none. There wasn't even a three ball count on any hitters all night. It was an outstanding performance from a pitcher who needed to be outstanding tonight.

The offense was about as exciting as it was last night except it looks a lot nicer when the game is close. Michael Young cleared the green monster in the first for his second home run of the year. Boston's Ryan Dempster kept them off the board until the 7th when They were able to manufacture the go ahead run off an Erik Kratz single to drive in John Mayberry. The Player of the Week added a little insurance in the 9th with a solo blast.

Then came Boston's all time saves leader, Jonathan Papelbon to close it out. The boos were loud as he ran to the mound he called home most of his career but he got some applause as well. He threw a perfect inning striking out Jhonny Gomes and getting former teammates Dustin Pedroia and David Ortiz to ground out for the save.

A very nice win after a dreadful loss. As I said, the lackluster offensive output is ok when you have Cliff Lee on his game.  We don't know what becomes of him or anyone else on this team as the weeks pass but it was nice to enjoy this one. It was a fun game tonight.

The Phillies return home with the Red Sox tomorrow at 7:05. John Lackey, who has been pretty good this season, takes the mound for Boston against Kyle Kendrick looking to come back to his winning ways off two mediocre starts.

Carlos Zambrano made his debut for the Clearwater Threshers tonight. Over 4.1 scoreless innings Zambrano allowed three hits, walked two, and struck out two. He threw 81 pitches, 49 for strikes.