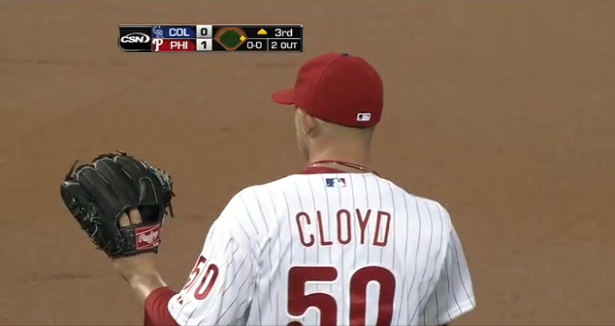 The Phillies wasted yet another Cole Hamels gem of a game last night by failing to score any run support. Taking the 2-1 loss, their second one-run loss in a row, the Phillies fell to 16-20 on the year and Cole Hamels, who allowed two earned runs through six, fell to 1-5 on the year. Simply pathetic.

The Phillies will aim to give Tyler Cloyd a warm welcome as he makes his season debut with the club today in place of Roy Halladay. Cloyd was called up last night and Joe Savery has been sent down in his place. Cloyd (minors: 1-3, 5.40 ERA) will take on Ian Kennedy (1-3, 5.19 ERA) in game two of this four-game set in Arizona.

Ian Kennedy is not having the year that he wants to have. The righthander has not won a game since Opening Day against St. Louis. Since then, Kennedy has gone 0-3 and has a 5.73 ERA (23 ER in 36 1/3 IP. In his last start, against the Padres on Sunday, Kennedy was tagged for five earned on five hits through 5 2/3 innings of work. Kennedy also struck out five, but walked three to take his third loss of the year. Kennedy has walked at least three batters in four of his last five outings, including four against the Dodgers on April 13th. Kennedy has good career numbers against Philadelphia, however, owning a 2-1 record and a 2.42 ERA (7 ER in 26 IP) in four career starts.