Eagles Flyers Phillies Sixers About Us Write For Us
Michael Young of the Phillies: Red Sox "Want Him Badly; Yankees Interested
Ryan Howard Starts As Kyle Kendrick Aims To Prevent Dodgers From Winning Series In Finale

The Phillies players with the largest-dollar contracts in Phillies history have not been their top-dollar selves this season. And now they are being asked to sit. First baseman Ryan Howard sat out the Phillies' Friday and Saturday contests in Los Angeles. Cole Hamels will be next: the left-hander will be skipped in the rotation, according to various reports.

Howard is still recovering from the devastating achillies injury he suffered in the 2011 NLDS and is battling knee troubles. That gave the Phillies reason to be patient. From a batting average standpoint, Howard seems to be Just okay at. 268, but he's not his old self by any means. Only hitting cleanup, Howard is on pace for 20 home runs and 82 RBI. The home run total would be his lowest ever for a full season.

Hamels is on pace for a 22-loss season. While it is true that Hamels has suffered poor run support, Hamels has appeared to let the season get to him. Pitching coach Rich Dubee has suggested that Hamels' issues might be mental. However, Hamels' ERA and WHIP are higher than any previous season's performance. Hamels will be bounced back two days with Monday's off day.

Should Jonathan Pettibone be bounced back, we may not bat an eye. But these are the Phillies' two most expensive players in franchise history. This is a message to all on the roster: put up or shut up. Hamels and Howard are probably somewhat embarrassed. Let's see how they and the rest of the team respond. 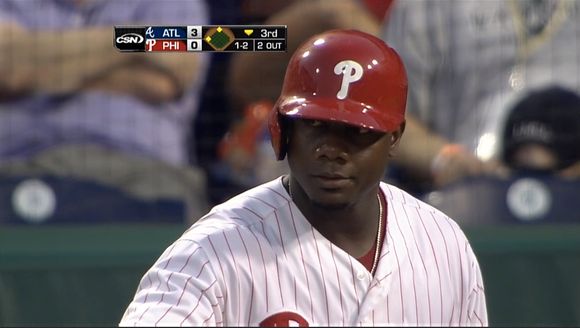