Lannan, Phillies Look For Series Win Against Mets, Must Go Through Harvey First 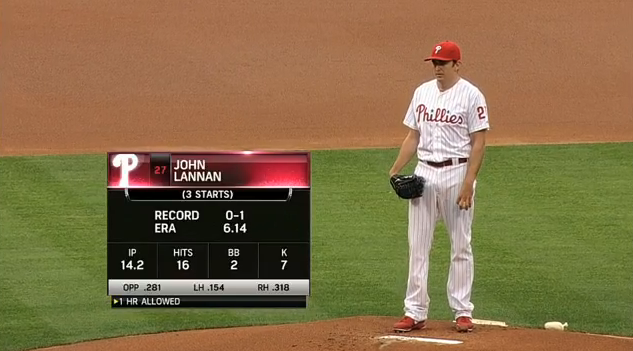 The Phillies are lucky for Kevin Frandsen. Seriously. While we writers were at the Reading Phillies game last night, our phones blew up with ESPN score updates alerting us that the Phillies had blown a 7-1 lead by letting the Mets tie it 7-7. Astonished, we all believed that the Mets would take the lead and win the second ball game of the series. We were wrong, however, after getting the alert that Kevin Frandsen homered in the bottom of the ninth to give the Phillies the win. Although Jonathan Papelbon blew his third save in a week, he still collected the win.

This afternoon the Phillies will look to go for the series win against the Mets. John Lannan (0-1, 5.49 ERA) will take on the phenom Matt Harvey (6-1, 2.16 ERA) in the rubbermatch.

John Lannan made his first start in two months last Monday against his former Nationals club. The lefty allowed six hits and two runs in five innings. Lannan walked a batter and struck out four hitters as well, but took the no-decision as the game was won on a Domonic Brown walk-off single. Lannan looked good on Monday, but he did have a high pitch count early into the game. Keeping the ball low against the Mets will work well for him. This will be his first start against the Mets this season as he looks to improve on his 5-4 career record and 3.46 ERA against them.

Matt Harvey is coming off of his sixth win of the year against the Braves last Tuesday. The righthander took a no-hitter into the seventh inning before surrendering three runs on three hits. Harvey walked three but struck out a career-high 13 Braves in his last start. Rolling over his last three starts, Harvey is 1-1 with a 2.14 ERA and looks to improve that against the Phillies as he faces them for the second time this year. On April 8 Harvey held the Phillies in check for an earned run on three hits through seven innings, resulting in his second win of the year and second career win against the Phils. He'll look to continue his dominance against the whole league today.