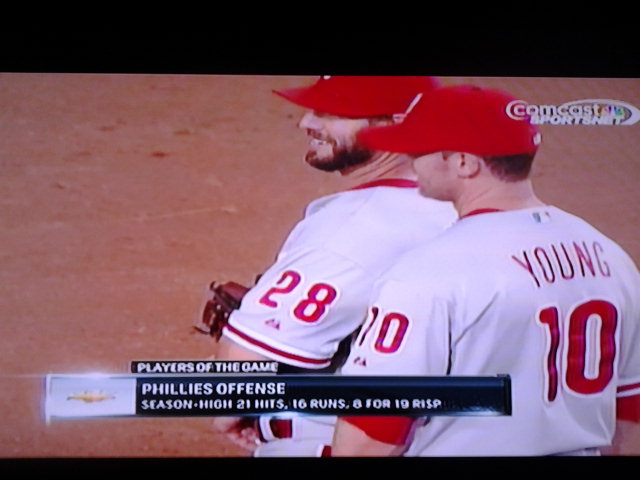 The Phillies rebounded from a tough loss yesterday by absolutely demolishing Los Angeles' pitching staff in support of John Lannan Friday, managing 21 hits in a 16-1 win.

Chris Capuano, who had pitched 11 scoreless innings stretching back to his last two starts, didn't look sharp at all out of the gate tonight, throwing close to 60 pitches in the first two innings as the Phillies jumped out to a 6-0 lead. He managed to work ahead of most hitters, but had a lot of trouble putting them away, even after reaching 0-2 a number of times only to allow the batters to reach base.

Michael Young and Chase Utley both singled to start the first inning, and Jimmy Rollins worked a walk to load the bases with no outs. A Domonic Brown grounder scored Young, and Delmon Young followed up with a single to plate the second run. Ben Revere singled past Hanley Ramirez at short to score Brown, putting the Phillies up 3-0.

Lannan, looking for his first win as  Phillie, was sharp early in sitting down the Dodgers 1-2-3 in the first, one of three such times he did so.

In the second, the Phillies continued the onslaught when Utley hit a two-out double off the wall in right-center. Rollins singled into right, and Yasiel Puig's throw wasn't close enough for the catcher to tag Utley, who scored, out. After Brown reached first on a fielding error by first baseman Adrian Gonzalez, Delmon Young smacked a double into the gap in right center, scoring Brown and Rollins to give the Phillies a 6-0 lead after two.

In the third, the Phillies went down in order, but the Dodgers managed to get their first baserunner of the night when Jerry Hairston Jr. reached on a hit up the middle with two outs, just beating the throw from Utley at second, but Mark Ellis would fly out to end the inning.

Michael Young led off the fourth inning with a solo home run off of Capuano, his fifth ot the year, to give the Phils a 7-0 lead. With two outs and a man on first, Peter Moylan came out to relieve Capuano, who was mad that he was pulled. As a competitor, it makes sense that Capuano would be unhappy, but the guy was terrible. His line: 3.2 IP, 7 R (5ER), 10 H, 1 BB, 4 K. The rest of the pitching staff, however, would fare no better.

With two outs in the top of the fifth, Carlos Ruiz doubled past Puig, who dived and missed the ball. John Lanna came up and got his second base-knock of the night, singling into left to score Ruiz, but ended up getting thrown out to end the frame with the Phillies up 8-0.

Andre Ethier singled with one out, but Lannan retired the next two to end the inning, having just allowed three hits through 5 IP.

The Phillies kept it rolling in the sixth, as Domonic Brown hit a single to right with men on first and second with no outs. Puig made a good throw on the play, but Michael Young, coming from second, managed to slide just under the catcher's glove to score the Phillies' ninth run, and Delmon Young's fielder's choice grounder plated Utley for the tenth. Young's RBI made tonight the first game this season that the Phillies scored 10+ runs. The very first.

John Mayberry, the only Phillies starter without a hit up to that point, then drilled a 2-1 pitch from Moylan into the left field seats, scoring Delmon Young and putting the Phillies up 12-0. The homer chased Moylan, who was replaced by Matt Gurrier to finish the inning.

In the bottom of the inning, Puig worked a two-out walk off of Lannan. Scott Van Slyke, pinch hitting for Adrian Gonzalez, then hit a double off the left-center wall to plate Puig, breaking up the shut out and cutting the Phillies lead to 12-1. Hanley Ramirez then followed with a single to right, but Delmon Young made a great throw to gun down Van Slyke at the plate to end the inning.

In the seventh, Lannan got his first career three-hit game when he singled with one out. Michael Young then hit a single for his fourth hit of the game. Newly-acquired infielder John McDonald made his first appearance as a Phillie when he pinch hit for Rollins in the inning, singling with two outs to score Lannan, which put the Phils up 13-1. After Brown walked, Young came up with another big hit as he singled up the middle to score two more runs, making it now 15-1.

The Dodgers went 1-2-3 in the seventh, Lannan's final inning. He finished having gone 7 innings, allowing just one run on five hits and a walk with two strikeouts.

In the eigth, Carlos Ruiz led off with a HPB, advanced to second on a groundball out, moved to third on a wild pitch by new reliever Brandon League, and scored on a ground-out by Michael Young for the Phillies 16th and final run of the game.

Phillippe Aumont relieved Lannan to start the bottom of the eigth, and worked around a walk to retire the side.

So taxed was the Dodgers bullpen that infielder Skip Schumaker was forced to come in for the ninth. It wasn't pretty, as he almost hit John Mayberry Jr. before walking him, but he managed to work a 91 mph fastball with some breaking pitches to hold the Phillies scoreless.

Joe Savery came on for the ninth for the Phillies and walked two before eventually sitting down the last few Dodgers hitters to end the game. The Final: 16-1 Phillies, on the strength of 21 hits.

Tomorrow the Phillies send Cliff Lee to the mound in LA to take on Hyun-Jin Ryu. Here's to hoping the batting magic carries over into the next game.