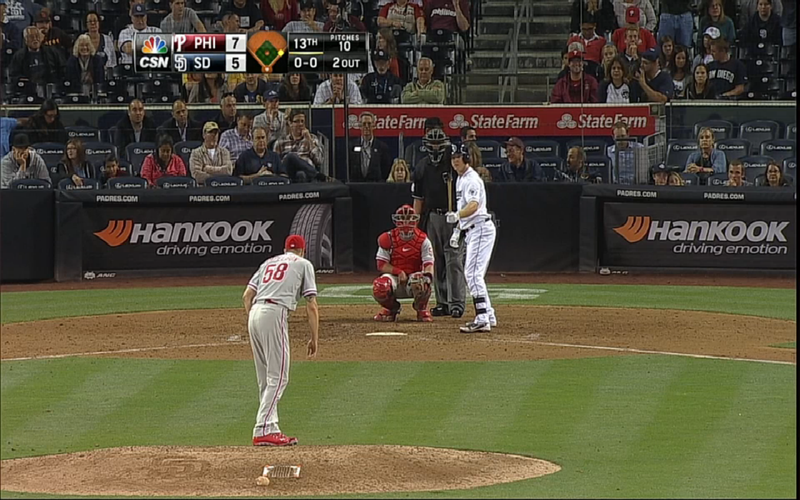 Cole Hamels
started the game with two hitless innings, and it went downhill from there. He
went 6 innings, allowed 7 hits, 5 runs, 4 earned runs, 2 walks, 5 strikeouts,
and 1 homer. His line was not terrible tonight, but his pitch placement was. He
was putting the ball dead center over the plate during 2-0 counts. However, he
does have a 4.97 ERA in the last 9 starts.

J.C. Ramirez
replaced Cole and went for two innings. He was solid with 1 strikeout.

Aumont came in
the 9th inning. He was able to work his way out of trouble to stay
in the game for two innings. He had 2 walks and 1 strikeout.

Diekman came
in to replace Aumont. Pitched one inning, gave up a hit.

Savery came in
the 12th and struck out the side.

Papelbon came
in to save the game in the 13th. He allowed one hit.

The bullpen
was absolutely amazing tonight. They allowed no runs for two straight days!
(It’s 2 AM and I think I’m funny.)

Chase Utley
got a single to get on base in the first, and Michael Young was able to double to
bring Chase home. 1-0, Phillies.

Cole hung a
changeup, and Forsythe got an RBI double. 2-1, Phillies. Forsyhe was able to
score easily on a single and an E9 from Denorfia. 2-2, Phillies.

Padres take
the lead in the 5th with a 2-run homerun by Denorfia, 4-2, Padres.

Padres expand
their lead to 5-2 in the 6th after a Blanks double to score Headley.

Frandsen gets
an RBI pinch-hit single to score Dom Brown in the 7th, 5-3, Padres. Bases were
loaded for Utley with 2 outs. Chase swung on the first pitch and made an easy
out to end the inning.

The clock
struck 2 AM in the 13th inning and Ben Revere hit into what looked
like an easy out to end the inning, but a bobble and an overthrown ball to
first score Utley and Brown. 7-5, Phillies.

Papelbon gets
the save, Savery gets the win, and the Phillies win the series.

View All Posts By Christine Schramm

View All Posts By Christine Schramm