Eagles Flyers Phillies Sixers About Us Write For Us
After Blow Out Win Phillies Send Lee To Face Ryu In Search Of 10th Win
Michael Young of the Phillies: Red Sox "Want Him Badly; Yankees Interested

Rally Killer: Phils use errors to tie game in 9th, lose on walk-off 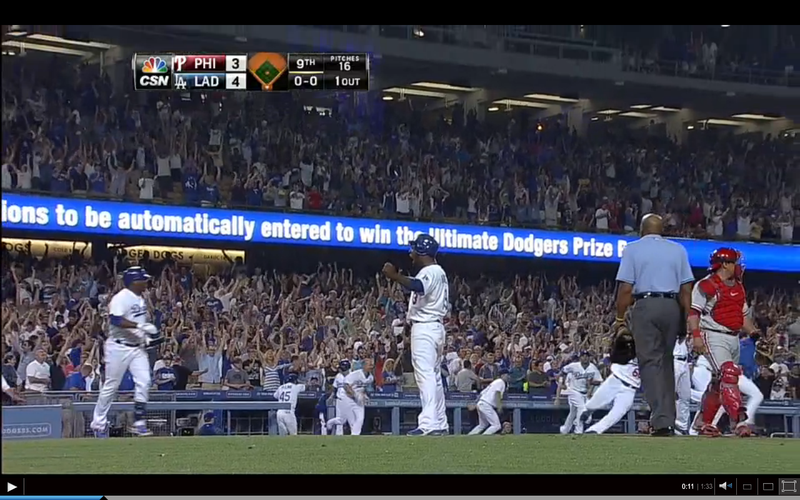 Miscues cost the Dodgers in the ninth inning and gave the Phillies a chance. At the very least, it erased a potential loss for Cliff Lee, who was two outs away from having one mistake ruin an otherwise solid outing.

The Phillies tied the game in dramatic fashion with the help of two errors by the Dodgers. But just as quickly as the Phillies gained life, any thoughts of another late-inning win were ousted.

The Dodgers handed Justin De Fratus his third loss on the road trip as A.J. Ellis' walk-off single in the ninth gave the Dodgers a 4-3 win over the Phillies on Saturday night at Dodger Stadium.

The Phillies got early offense from Chase Utley. He continued to hit well at Dodger Stadium, belting a solo home run to get the Phillies on the board.

But Lee struggled out of the gate. A tight strike zone combined with an early burst from the Dodgers. Yasiel Puig singled and Adrian Gonzalez walked to put two on for Hanley Ramirez. Ramirez swung at the first pitch and crushed a three-run shot to center.

The Phillies trimmed the lead in the third as Utley went deep for the second straight at-bat. For a while, that looked like all the Phillies would manage.

Lee was excellent the rest of the way. He worked around a bases-loaded, no-out jam in the fourth to keep the Dodgers' lead at one. He finished with seven innings allowing three runs on four hits. He walked three and struck out 10.

J.C. Ramirez and Jake Diekman combined for a scoreless eighth to send the game to the ninth. The Phillies had the bases loaded with one out in the eighth and failed to score the tying run.

Michael Young led off the inning with a single and went to second on an error by Puig. With one out and Young at third, Jimmy Rollins hit a fly ball to shallow center. Matt Kemp made the catch and fired home, holding Young at third. The throw bounced off-line and skipped away from catcher A.J. Ellis. Young darted home with the tying run.

But De Fratus entered for the ninth and quickly got into trouble. Ramirez singled to lead off the inning. With one out, Andre Ethier walked to put the winning run on second. That brought A.J. Ellis to the plate.

After falling behind 0-2, he worked the count back to 2-2. De Fratus' sixth pitch of the at-bat was of the same variety as the first five: a fastball. Ellis lined it into right. Ramirez went through a stop sign but Delmon Young's throw was late and the Dodgers emerged with a walk-off win.

The Phillies fell to 39-43 with the loss. They close out the series with the Dodgers on Sunday afternoon. Kyle Kendrick gets the start against Stephen Fife.