Eagles Flyers Phillies Sixers About Us Write For Us
Kendrick, Phillies Look For Second-Straight Win Against Giants, Gaudin
As the Trade Deadline Passes, So Does the Phillies Winning Streak 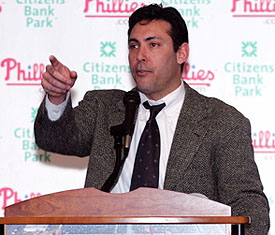 In what was gearing up to be a rather uneventful trade deadline in the first place, the Phillies made zero moves.

As the day went on we heard of the various teams Michael Young would approve deals to but by that point, those teams had all the leverage and appeared not very willing to send much of anything the Phillies's way.

Cliff Lee remains with the squad after the Phillies asked for the moon for him and Boston went and acquired Jake Peavy instead.  I still think he could be in play after the season.

Carlos Ruiz who I felt was a dark horse for a deal also still among us. Papelbon was never going anywhere once it was clear Detroit was not interested.

It's disappointing. I really do not see the point of this team the way it has performed going into the trade deadline and not making any moves. I still think eventually there will be waiver deals to be made in the next month. It appears with the new playoff set up that that is where the action is now. It also wouldn't hurt to move the trade deadline. But the Phillies have to know they are out of it and they had an obligation to make adjustments and they did nothing when they had a chance.

Even with the Chase Utley case. We hear the buddy buddy stories of the two sides working towards an extensino. Here we are at 4:50 ET and no extention was announced and Utley still heading into free agency. He holds the cards now and could very well take an offer elsewhere come November. Who stops him?

Nothing is not very acceptable for Ruben Amaro Jr. who has wowed in the past on days like today. Today he came up less than short in a season that needed some shaking up. There is no exuse for it. We now are officially looking towards the off season and it's not even August.