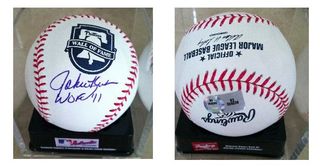 The Phillies are always looking for new ways to expand the offerings at their Citizens Bank Park, Authentics stand.  Known for its racks of game-used jerseys, the tiny store which is located on the main concourse, behind Section 133, is stretching its wings this season - having added several unique, Phillies collectibles in 2013.

During a homestand last month I made a point to stop in at the stand.  One of the more interesting items were the the autographed commemorative Rawlings baseballs featuring a blue, Wall of Fame logo in the glass showcase.  Up until now, there has been little officially merchandised Wall of Fame memorabilia available for Phillies collectors, and the balls help fill the void.

Overall, collectors should be pretty happy about the selection the team has made available.  Most living WOF members are represented.  Among the obvious omits are Hall of Famer Steve Carlton, Whiz Kid Curt Simmons and Darren Daulton.  Though they exist, for reasons unknown, the "Dutch" signed balls were pulled from circulation when his illness was revealed.  Also of note, according to Retail Merchandising Coordinator, John Hollinger, there are no current plans for unsigned logo balls to be sold - meaning we'll have to count on the Phillies to continue adding to their offering in the future.

Make sure to check them out next time you're at CBP!