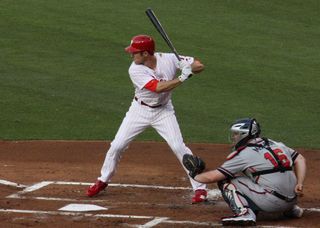 When it comes to being an athlete in the city of Philadelphia, few players are more popular than Philadelphia Phillies second baseman Chase Utley, who entered the 2013 season in the final year of his contract.

After general manager Ruben Amaro Jr. expressed interest in keeping him and Utley expressed his desire to remain with the only major league club he has ever played for, the two sides decided that there was no need to drag things out to after the season.

On Thursday afternoon, the speculation became fact—Chase Utley signed an extension with the Phillies, agreeing to a two-year, $27 million deal with multiple vesting options, according to Ken Rosenthal of FOX Sports.

The contract is interesting and unique. Just how do you compensate a player that is considered both "oft-injured" and among the "elite" of his position?

Utley, 34, has been a major injury concern for the Phillies in recent seasons, thanks in large part to a chronically degenerative condition in his knees. However, his knees have not been a concern this season. Entering play on August 7, Utley had appeared in 84 games and posted a slash line of .277/.337/.505, with 15 home runs. His WAR of 3.1 is sixth best among all major league second basemen this season.

That success made the first half of his new contract simple.

The deal guarantees Utley $27 million through two seasons. In 2014, the second baseman will earn $15 million. He will then earn a base salary of $10 million in 2015, with the potential to earn an additional $5 million as long as he is not on the disabled list for more than 15 days with a specified knee injury. Finally, the deal includes a $2 million buyout and a full no-trade clause.

The real kicker is the upside for Utley. As long as he remains completely healthy, he can max out his new contract with the Phillies for five years and $75 million through a series of complex and challenging vesting options.

Should Utley reach 500 plate appearances in 2014, a vesting option for $15 million will activate for the 2015 season. The same formula applies to two additional vesting options for both 2016 and 2017.

Failure to reach those lofty vesting options will not necessarily result in Utley becoming a free agent, however. Should he fail to reach 500 plate appearances in any of those three seasons, the vesting options would become conditional club options, allowing the Phillies to choose whether or not to keep Utley aboard the following season. The conditional club options could pay Utley anywhere from $5 million to $11 million, dependant upon time served on the disabled list the previous season.

It's a complicated contract, no doubt, but one that will allow the Phillies to both keep the face of their franchise in their uniform and guarantee that a degenerative condition will not create a contract that cripples them well into the future.

In an era where it is becoming increasingly rare for a player to spend his entire career with a single team, the Phillies are giving the former UCLA product, drafted in the first round in 2000, the opportunity to do just that.

Wheter or not the front office can build a contender around him, well, that's a question for another article. For this brief moment, Phillies fans can rejoice in knowing that one of their all-time greats and favorites isn't going to be suiting up for another club next season.

View All Posts By Greg Pinto

View All Posts By Greg Pinto