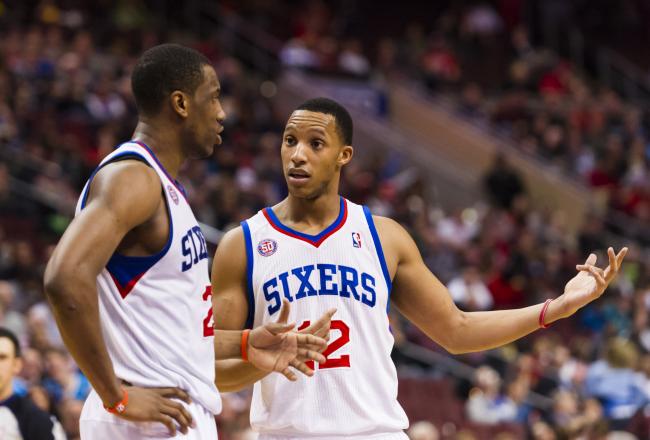 Training
camp for NBA teams is underway as we near the start of this year's season. The
Sixers, probably the most unrecognizable team in the NBA, have 13 new players
on their training camp roster. Many of these players have a legitimate shot at
making the team this year, so we can expect a lot of hard, tough competition in
camp and during the pre-season.

If you scroll through the names of the players on
this year's training camp roster for the Sixers, you may find yourself asking,
"Who are these guys?". There is no need to worry as I imagine this is
a common occurance amongst many Sixers fans this year. I will break down the
roster and let you know who is worth keeping an eye on this season.

Point Guards: Rookie Michael Carter-Williams
is likely to be the team's starting point guard once the season begins. The
role of backup point guard has yet to be determined. I see it as a three way
competition between Vander Blue, Darius Morris, and Khalif Wyatt. Blue, a
former standout guard from Marquettee, went undrafted in this year's NBA Draft.
His talent was too promising to be kept out of the Association for long, so the
Sixers picked him up. Morris, formerly of the Lakers, started 17 games for Los
Angeles last season before being burried on the bench for the rest of the
season. Wyatt, a Temple product and Philly native, played with the Sixers'
summer league squad and impressed many people. I think the Sixers will keep two
of these players, and I would bet they chosoe Blue and Wyatt.

Shooting Guards: The reason I said that they
will keep two of the point guards I mentioned above is because of the lack of
depth at the shooting guard position for this Sixers team. James Anderson, Tony
Wroten, and Jason Richardson are the listed shooting guards on the roster.
Richardson will miss significant time this season nursing a knee injury, so the
team will probably have to go with James Anderson to start the season at
shooting guard. Wroten will most likely be his backup, but both Blue and Wyatt
can play that position as well. Evan Turner and Rodney Williams, though listed
as small forwards, can also help play this position if needed. I am not
expecting much from Anderson or Wroten this year, but maybe one or both of them
can develop into a consistent contributor for the team.

Small Forwards: Evan Turner will return as the
team's starting small forward this season. Royce White, Rodney Williams, and
Hollis Thompson will compete in training camp and the pre-season for backup
duties. White, an off-season acquisition for the Sixers, has promise to his
game. He showed the ability to be a great player in college, but has yet to
touch the hardwood in an NBA game. If White can overcome his anxiety issues
then I think he will win the backup small forward position hands down. If he
cannot, then one of the other two will replace him. Williams competed on the
Sixers summer league team and was one of the team's best players throughout the
camp. Thompson is a former Georgetown Hoya who spent time in the D-League last
season. His outlook to make the team is grim.

Power Forwards: Thaddeus
Young, possibly the most talented player on the roster, should return to his
role as starting power forward this season. Arnett Moultie is out until January
with an ankle injury. This leaves the door wide open for Lavoy Allen to pick up
some quality minutes off the bench this year. Once Moultrie is back, I can
imagine a rotating frontcourt including all of these players. Mac Koshwal and
Tim Ohlbrecht are the other power forwards on the roster, but I would be
shocked to see either of them make the team.

Centers: Spencer
Hawes will start the season as the Sixers starting center, but he should slide
into a backup role once Nerlens Noel returns from injury. The other two centers
on the training camp roster are Kwame Brown and Solomon Alabi. I can't imagine
Brett Brown is dying to keep either of these veterans, but if I had to choose
one to make the team it would be Brown due to his ridiculous contract.

The young Sixers will struggle this season, but they have plenty
of minutes to go around to all of their players. The Sixers begin their
pre-season on Sunday in Spain.