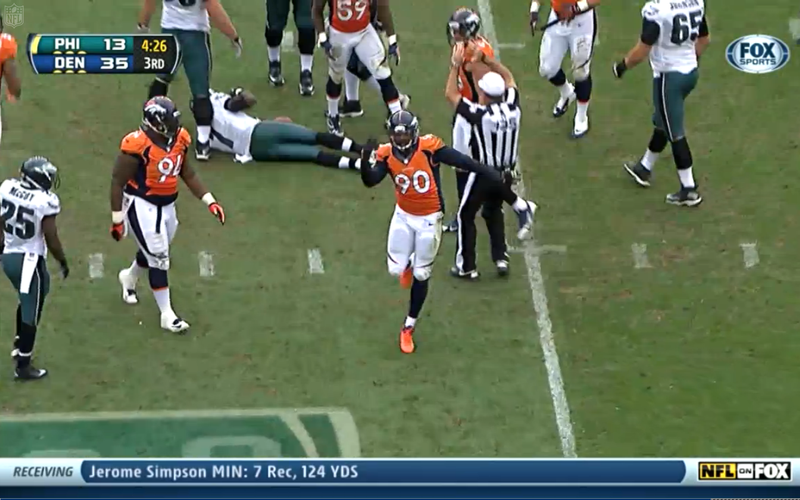 On paper, this was an obvious mismatch. On the field, it
should have never equated to what it was.

Does anybody remember when it was 21-13 at the half? Okay,
just making sure that actually happened.

It was known coming into this game that the Eagles didn’t
have the weapons to match up with the Denver Broncos. It was obvious that Peyton Manning would control the team.

But goodness was this a nightmare game for the Eagles. The 52-20 score was not surprising. But it was embarrassing, and not just because the
Eagles lost by that score.

The way the Eagles played was pitiful, from top to bottom. Michael Vick was easily mismatched by
Manning. The Eagles running game was easily stopped by the Broncos. The Eagles
receivers were never open, compared to the wide-open targets Manning had to
work with.

None of it was surprising. All of it was unacceptable.

Sure, there were plenty of things the Eagles couldn’t
control – like friendly spots on close first downs and a couple of penalties
that were called or went uncalled. Regardless, the Broncos have earned such
things. They are 4-0 now for a reason. Their quarterback is unstoppable.

But what Manning showed is not that he is a good
quarterback. More so, he showed how a quarterback can be great when he has the
right weapons and plenty of them to go around.

Vick’s top target is easy to find. He wears No. 10. After DeSean Jackson, who does Vick have? Riley Cooper? Brent Celek? James Casey?
Jason Avant? Most of them were
invisible yesterday.

Defensively, the Eagles struggled continued. The Broncos
proved that tackling is not a lost art in football. There are teams – usually
the best teams – that just attack when it comes to tackling.

Denver didn’t make any illegal tackles. They didn’t do
anything overly violent or beyond the rulebook. They made the textbook plays where
they were most needed.

The Eagles defense couldn't look past the deception that
Manning presents, and that was only from the line of scrimmage. If brother Eli
just screamed “Omaha!” next week, it wouldn’t be too shocking if Fletcher Cox jumped offsides.

That was where the Eagles beat themselves. Manning has the
talent to make it look easy. That was almost too easy.

To make matters worse, by the second half, the Eagles had
lost at their own game. It was Manning, not Vick, wearing out a defense with a
fast-paced play-calling system. The Broncos essentially beat Chip Kelly at his own game, no-huddle
offense and all. And by the time the Broncos and Steven Johnson both blocked a punt and returned it for a touchdown, the game was officially a laugher.

All the Broncos did on this afternoon was set a franchise-record in points. Manning also joined the history books by throwing four touchdown passes for the 24th time in his career.

It might as well be considered a blessing that the Eagles
are looking at back-to-back weeks against teams that are in shambles. The Giants
have yet to win and don’t look sound at all. The Buccaneers are a mess.

There is still hope for a team that is still somehow tied
for second place despite a 1-3 record. There are benefits to playing in the
weakest division in football.

Still, the Eagles lacked the fundamentals and the patience
required to deal with Manning. They flat out lacked the talent to compete with
the Broncos. Perhaps the struggling Giants are just what this team needs.

Kevin Durso is a contributer for Eagledelphia. You can read his Monday Review following every Eagles game. You can also follow him on twitter @KDursoPhilsNet.