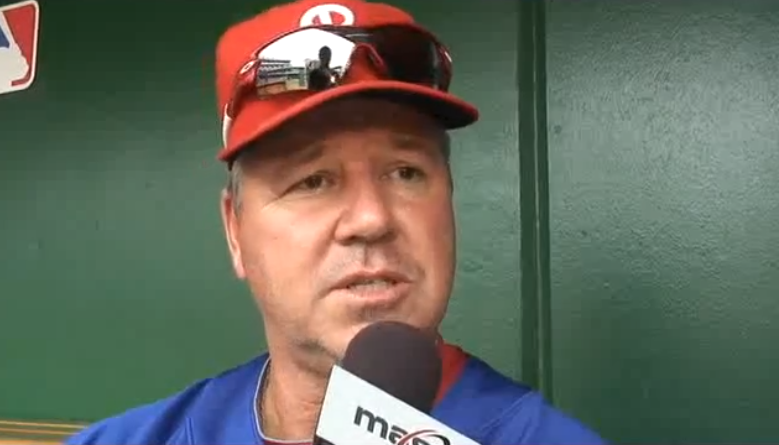 The first shoe has dropped in the Phillies offseason plans.   Pitching coach Rich Dubee, on former manager Charlie Manuel's staff for the entire nine years of Manuel's tenure, has been let go by the Phillies, reports multiple media outlets.  Dubee has been a coach since 1982 and previously was the pitching coach for the Florida Marlins.  Dubee spent four years in the Phillies minor league system before joining the major league staff in 2005.

Overall, it's fair to say that Dubee did a fine job.   While he did have a pitching staff with four aces, he also got the Phillies through many lean years and helped develop young pitchers that would either be traded for the aces or do an admirable job.  The Phillies seemed to acknowedge as such when they released this statement:

Rich was a big part of a wonderful era here and in his nine years he served our organization very well,” said Senior Vice President & General Manager Ruben Amaro Jr.  “We believe it is time for change as we move forward.  We thank Rich for his professionalism and contribution to the Phillies.”

Dubee’s nine years as pitching coach was the longest service time at that position for the Phillies in the last 35 years and tied for the most in club history with Cy Perkins (1946-54) and Ray Rippelmeyer (1970-78).

The Phillies will have announcements regarding the remainder of the coaching staff at a later date.

Dubee was not fired, per se; his contract was up at the end of this season.  The Phillies likely want to hire someone that Manager Ryne Sandberg chooses, or at least has a say in choosing.  The pitching coach is usually tied to the manager.  In addition to serving as pitching coach, Dubee was Manuel's de facto bench coach in 2013, when the Phillies opted to add a second hitting coach instead.