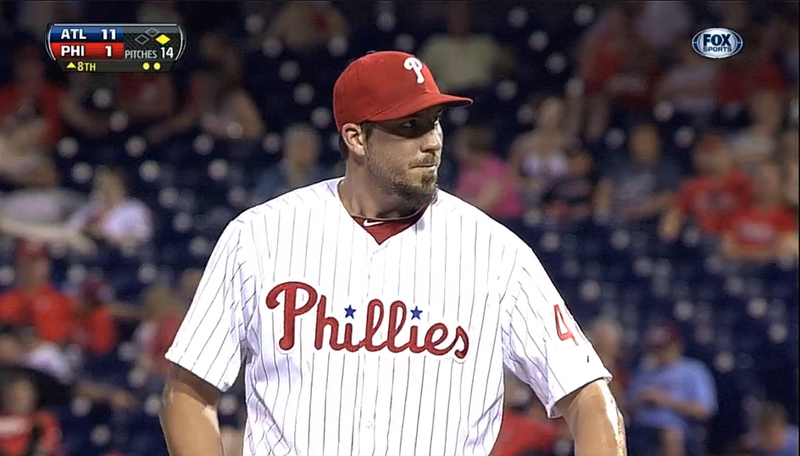 Boo hoo.  Phillippe Aumont was left off of the Phillies' September call-ups after a tumultuous year in which he did everything to keep himself out of the Phillies' good graces.  After Aumont closed out the 2013 AAA season with a thud on Monday, he now heads home for a long offseason to think  about his 2013 season and approach to the game.

Back in July, the Phillies jettisoned Aumont in favor of the little-known and hardly productive Luis Garcia.  At the time, Phillies pitching coach Rich Dubee basically said that Aumont does whatever he wants, not what coaches ask of him:

"He's hard to give a lot of stuff to," Dubee said, "because what he's doing, he feels comfortable doing.  He believes in what he's doing is going to work. You need belief in what you're doing, but at the same time I think there's more upside if he gets lengthened out a little bit. I don't mind headstrong guys. If you don't believe in what you're doing, you're not going to be successful. On the other hand, you have to have some self evaluation to see what's working and what isn't working."

This was Aumont basically saying, "You can't tell me what to do, because I know everything there is to know already and I will do it my way".   That is the type of thing that any boss would never tolerate.

Aumont has incredible talent.  He has a strong arm and a lively fastball.  But Aumont needs to learn how to control his pitches.  When he was effective, he was effectively wild.  That is, he got a lot of strikeouts from people swinging at his pitches all over the place.   But along with that came plenty of walks from the patient hitters that you find in the major leagues.   And then, in the minor leagues, too.

Here is a tweet from Allentown Morning Call writer Jeff Schuler, that explains everything you need to know about Aumont:

can't close out hte season without a typical Phillipe Aumont outing … walked the first two, then uncorked a wild pitch

Wild pitches, walks, more wild pitches, more walks… that explains Phillippe Aumont.  But since he throws fast, he has a bunch of strikeouts.  Given such talent, one would expect that Aumont would be happy to receive help from his coaches to better himself.  But Aumont told Schuler back in July that he was "confused" by their help:

“It’s very, very confusing,” a frustrated Aumont said after batting practice on Saturday. “Baseball is a very confusing thing because you have so many people who have so many different perspectives on how to do things. At the major league level, (bullpen coach) Rod (Nichols) is telling me something, then I come down here and can hear different stuff. Which way do I go? Do I want to please the people while I’m down here right now or do I do the things the big league wants me to do even if I’m not doing the stuff they want me to do here?

“I’m the one who’s caught in the middle and I have to make a decision. We don’t always make the best decisions, nobody does, but I have to find a medium of where I can get to where I want to be and at the same time, try to do some of the things they want me to do. The bottom line is I’m going to do what’s good for me and whatever anybody else says goes in and out for me.”

Nichols was Aumont's pitching coach at AAA last season and he opened this season in a bullpen overseen by Nichols, so it is not as if he got the major leagues in 2013 and suddenly had a major change.

It was Schuler who broke the news of the Phillies' September callups and soon thereafter spoke to Aumont, who was not happy:

"Completely garbage," he answered when asked to evaluate his season. "I think it was mostly a waste of my time in the sense that … I don't know. I just felt like I was going in circles instead of going forward, you know what I mean?"

Asked if he thought he'd be in the organization next spring, Aumont answered, "We'll see. I don't know what they want to do.

"If I'm not in their plans, I don't want to be back. But if I am … I want to be with the Phillies but at the same time if they've moved on [from me] or whatever, then I think it's time for me to move on. There's 29 other teams out there and plenty of other opportunities out there."

The Phillies may not cut ties with Aumont.   They may wish to keep his talent in the hopes that he learns his lesson.   Rod Nichols may be the Phillies new pitching coach for 2014, so the leadership he does not trust won't change.  There would be teams eager to convert Aumont's talent into results.  But hopefully the message delivered to Aumont heading into the offseason is loud and clear.  If not, he has six months to get it, provided the team does not trade him by then.