Eagles Flyers Phillies Sixers About Us Write For Us
Chip Kelly to Nick Foles: "Grip It And Rip It"
Flyers acquire Downie from Colorado, trade Talbot

Chip Kelly to Nick Foles: "Grip It And Rip It" 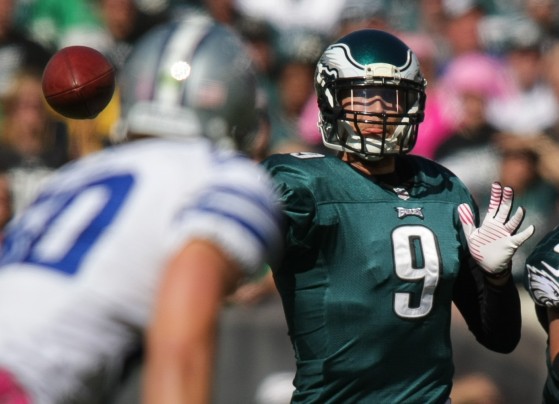 Two weeks after playing the worst game of his professional career and perhaps one of the poorest showings of any Philadelphia Eagles quarterback in franchise history, Nick Foles will get back on the horse and take the ball Sunday against the Oakland Raiders.

For Foles who for whatever reason rapidly regressed from his 133.3 passer rating three touchdown passes and one rushing score against the Tampa Bay Buccaneers just one week prior morphed into a less than pedestrian quarterback throwing for just 80 yards against the Dallas Cowboys. The challenge now for the second-year quarterback is putting that dreadful afternoon at Lincoln Financial Field in the rearview.

By all accounts Foles has put together a solid week of practice thus far and as high as the organization is on him, now has the chance to seize the starting job once again for the foreseeable future. With Michael Vick sidelined with a hamstring injury having missed significant portions of the last three games and playing for a head coach who is currently in search of consistency at the quarterback position, the door is wide open for Foles.

Still, it is a big spot for the only quarterback to complete 60 percent of his passes and average 240 yards per game as a rookie in NFL history to be in after such a woeful afternoon two weeks ago.

"I know how confident Nick is in practice, but I also think he understands how he played in the Dallas game and how he's practicing right now, he's practicing real well but we'll see," Kelly told reporters Thursday."It's a daily basis. Sometimes that position is like playing golf. Some weeks you'll have a great round be in contention and the next you'll struggle to make the cut. Nick knows the consistency we need out of him and he's working on practicing that right now."

The first-year head coach made it clear that while Foles did not perform up to expectations against the Cowboys, there was plenty of blame to be shared amongst his teammates, which is much different than being on a golf course where one is in total isolation and control of their own individual outcome.

"Unlike Golf, playing quarterback there are ten other guys you are depending on," Kelly pointed out. "You can go out there and say that the quarterback had a bad game but you can look and see that every time he dropped back he got hit in the back of the head because the left tackle couldn't protect. You can see every time he goes back to follow through he's getting hit. When you hit a bad drive [on the golf course] you don't turn around and blame your left tackle, it doesn't work that way. It's you, it's you out there the entire time.

"In football sometimes it's difficult. The quarterback gets too much praise when he's winning and two much grief when he's losing. There are a lot of time when you're like 'he's gotta throw the ball, he can't take that sack' but maybe he thought the three technique was blocked, but he wasn't and the defensive tackle came in clean. How come he doesn't know that? Because every time we run that play and when we put it in he was blocked every time."

The bottom line for Foles and this Eagles offense is that against the Raiders on Sunday afternoon, it is paramount to return to form after failing to record an offensive touchdown since October 13th against the Tampa Bay Buccaneers. However the challenge is to not let the weight of those struggles carry over to the game.

"Sometimes I just tell Nick: 'Grip it and rip it, let's go,' He's thrown a lot of really good passes since I've been around him. He's thrown six touchdowns and hasn't thrown an interception yet and I think you can over-analyze that but the big thin for him is we need to get him into a rhythm."

WTG Foles go get 'em man and take this job over for good. It was taken from him in pre-season when he had already won it a year ago. not to kosher.