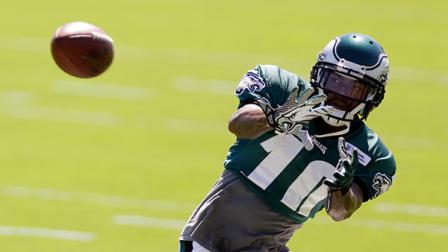 After tweaking his ankle in practice Wednesday, Eagles wide receiver DeSean Jackson has been a limited participant in practice the past two days. Photo Courtesy: ABCLocal.com

On Wednesday Philadelphia Eagles wide receiver DeSean Jackson tweaked his ankle and as a result was limited in practice both on Wednesday and Thursday at the team prepares for Sunday's game in Oakland against the Raiders.

“He hurt his ankle, but he should be fine,” Head coach Chip Kelly said before Thursday's practice. “We’ll see what he can do and what the effects are, but he just rolled it or tweaked it or whatever, but he’s going today.”

The Six-year veteran receiver who has posted 45 receptions for 673 yards and five touchdowns through the season's first eight games is not expected to miss Sunday's game.

Meanwhile the road to recovery has been far less simple for safety Patrick Chung, signed by the Eagles in the offseason as a free agent and who hasn't played a full game since week two against the San Diego Chargers.

Chung's struggles with a shoulder injury have been well documented, but he was able to return as a full participant both Wednesday and Thursday.

“I think it’s frustrating for Pat,” Kelly said. “If you saw Pat last week in practice, he played look-squad receiver and he played look-squad DB and took every single rep and we couldn’t get him out and he’s running around full speed. It’s just can he take a hit, and he’s still trying to gauge that a little bit.

It remains to be seen if Chung will be able to suit up for the first time since the Eagles topped Tampa Bay on October 13th, but if he is unable to go it will mean another start for rookie fifth-round draft choice Earl Wolff.

Elsewhere on the injury front, defensive lineman Cedric Thornton, punter Donnie Jones (foot) and linebacker Casey Matthews (hip) again practiced on a limited basis, as did quarterback Michael Vick, who already has been ruled out for Sunday's game.

Running back Chris Polk (shoulder), who didn't practice Wednesday, was a full participant, as was offensive tackle Jason Peters (shoulder, finger), who was limited on Wednesday.