Duck and Cover: Flyers fall on another late goal 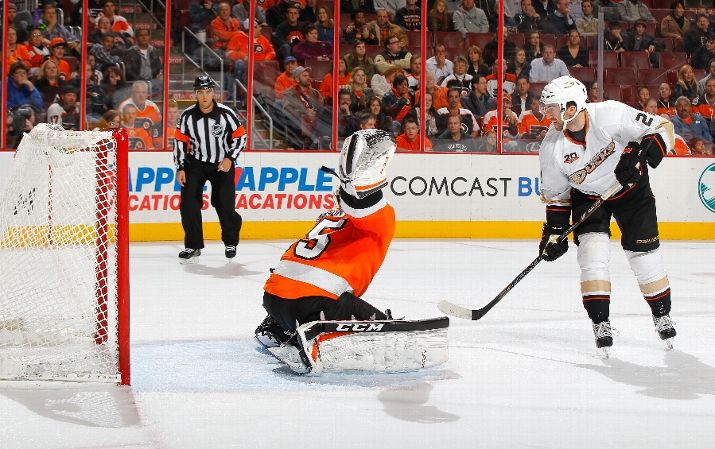 Kyle Palmieri scores his second goal of the game in a 3-2 Flyers loss to the Ducks on Tuesday. Photo Courtesy of ESPN.com

For the first 20 minutes, the Philadelphia Flyers played like a determined team, a team that had turned the corner on the worst start in franchise history. But as the energy disappeared, the Flyers quickly reverted back to old ways.

The Anaheim Ducks would rally for two third-period goals, both by Kyle Palmieri, in a 3-2 win to beat the Flyers on Tuesday night at Wells Fargo Center.

A dominant first period paced the Flyers early as they controlled the pace. They would outshoot the Ducks, 15-10, in the first. They also led where it counts, 2-0.

Just 3:40 into the game, Matt Read buried his own rebound for his third goal in as many games, giving the Flyers a 1-0 lead.

Late in the period, at 16:34, the Flyers capitalized on the power play. Claude Giroux made a brilliant pass across the slot to Vincent Lecavalier for a one-timer, Lecavalier's fourth goal in the last two games and team-leading fifth of the season.

The Flyers continued to control the play early in the second, but started to slip around the halfway point. With the Ducks buzzing with scoring opportunities, a turnover by Nick Grossmann led to a chance for the Ducks, with Ryan Getzlaf firing wide of the net. But the rebound off the endboards bounced right to the tape of Andrew Cogliano for a goal.

Anaheim would take over in the third. With the momentum of the second-period goal, the Ducks would keep the pressure on and capitalize early with a breakaway goal for Palmieri.

As the pressure continued, with the Ducks outshooting the Flyers, 14-6, in the third, Palmieri would finish a two-on-one chance with just 4:09 remaining in the third.

A late power play gave the Flyers a chance at the equalizer but the Flyers failed to convert, allowing the Ducks to close out the win.

Steve Mason was solid in goal once again, stopping 34 of 37 shots. Jonas Hiller proved to be slightly better, stopping 26 of 28 shots.

Tuesday's win for the Ducks marked their first win when trailing after two period.

The Flyers are back in action on Friday when they host the Washington Capitals.