Eagles Flyers Phillies Sixers About Us Write For Us
Eagles Have Winning Attitude According to Chip Kelly
1, 2, 3, 4, 5…SIXERS!! Game 1: Sixers vs. Miami Heat

Eagles Have Winning Attitude According to Chip Kelly 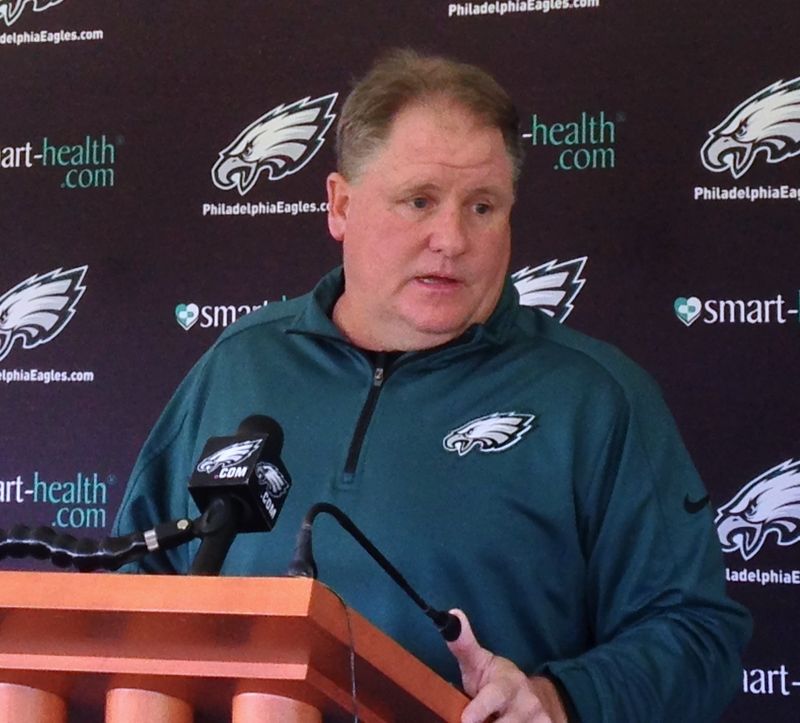 In a locker room that bailed on their former head coach, Chip Kelly loves his team's attitude and the veterans have forged a family like atmosphere this season.

In spite of losing back to back games against NFC East opponents, Philadelphia Eagles head coach Chip Kelly loves the attitude of his team.

"The one thing about this group is I think they have a great attitude," Kelly told reporters Thursday at the Novacare Complex. "Every single day they walk into this building and we talk about that all the time. That's their choice. It takes the same amount of time to be miserable as it does to be happy, and you choose what you're going to do."

It would be easy to pin this group down, many of the same veterans on this team rolled over on former head coach Andy Reid a year ago and sleep-walked through much of the past two seasons, as having flawed character, but the first-year head coach simply doesn't see it that way.

"They love being out here," Kelly said. "They understand the win that you have to win during the week. They don't just win on Sunday, you can't just show up on Sunday and hope that good things happen. There's a certain amount of work that goes in, there's a certain rythm we have to get into. They've been really good from that standpoint and that's an encouraging thing."

From day one the veterans have bought in and that hasn't changed midway through the season.

"We're more together as a team I think," Trent Cole, a nine-year veteran who has seen it all said Thursday. "We're more of a family then we were before. We work with each other and everybody's taking the approach that it's a new year, the new Eagles and be as a team because if you don't take that mentality you'll find your way out of here."

This is a group that has been asked to take on a lot.

From sleep monitors worn nightly to heart monitors worn in practice, protein infused smoothies rather than candy corn and Hershey's after practice, the methodology has vastly changed since Kelly's arrival.

With only three wins, one would think it would be easy for some players to question the new business as usual. That simply hasn't been the case.

"We just have a great group of guys with a good attitude a good work ethic and we just come to practice working hard every day and it pays off." Nate Allen said. "We know we have a lot of games ahead of us and we're no way out of anything and we just have to stay positive, fix the mistakes that we do have and keep getting better."