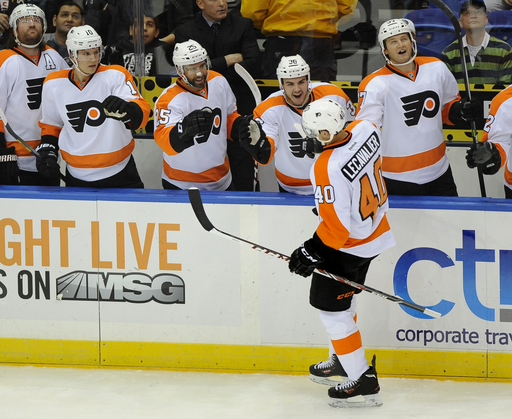 Vincent Lecavalier netted a hat trick in the Flyers 5-2 win on Saturday and now leads the team with four goals this season. Photo Courtesy of ESPN.com

The Flyers just followed a week off with wins on Thursday and Saturday. On Saturday, in their 10th game of the season, they broke the trend of scoring two goals or less, beating the Islanders, 5-2.

With that blemish removed following nine games of questionable offense, the Flyers now move toward another step in the right direction: three straight wins. They get that chance on Tuesday night as they face the Anaheim Ducks.

The Flyers now have a new leading scorer in wake of sending Tye McGinn back to the minors and bringing back Scott Hartnell and Vincent Lecavalier. Lecavalier's hat trick on Saturday helped elevate him to four goals on the season, leading the team.

Claude Giroux is still in search of his first goal of the season, but is now sitting in third place on the team in points with five, trailing only Lecavalier and Brayden Schenn.

In each of the last two games, two key forwards picked up thier first goals of the season. On Thursday, it was Matt Read scoring his first goal. Jake Voracek scored for the first time this season on Saturday. Read also added a goal on Saturday.

The Ducks pose a mighty threat to end the Flyers recent winning ways. They come in with a 9-3-0 record and 18 points, third in the Pacific Division. They are led by Corey Perry and Ryan Getzlaf. Perry has six goals and 13 points. Getzlaf has 12 points, including five goals. Matheiu Perreault is third on the team with nine points.

There are other sources of offense for the Ducks with limited numbers this season. Despite that, they still pose a threat. Saku Koivu, Teemu Selanne, Nick Bonino and Kyle Palmieri are among a strong forward core for the Ducks. Koivu suffered an injury on Sunday and returned to Anaheim, which will likely keep him out of Tuesday's game.

Defensively, the Ducks are bolstered by Francois Beauchemin, Bryan Allen and Ben Lovejoy. Currently, the Ducks are forced to use a young defensive group with Luca Sbisa and Sheldon Souray out with injury.

Special teams is another area that could help the Flyers. The Ducks rank 30th in the NHL in power play – at just 4-for-49 this season – and 26th in penalty kill – 10 goals allowed in 42 attempts. That includes a league-worst road penalty kill, allowing nine power-play goals in 25 attempts. The Flyers power play has been just as weak, ranking 26th in the NHL scoring on four of 40 attempts. But the penalty kill is ranked ninth, allowing just seven power-play goals on 44 attempts.