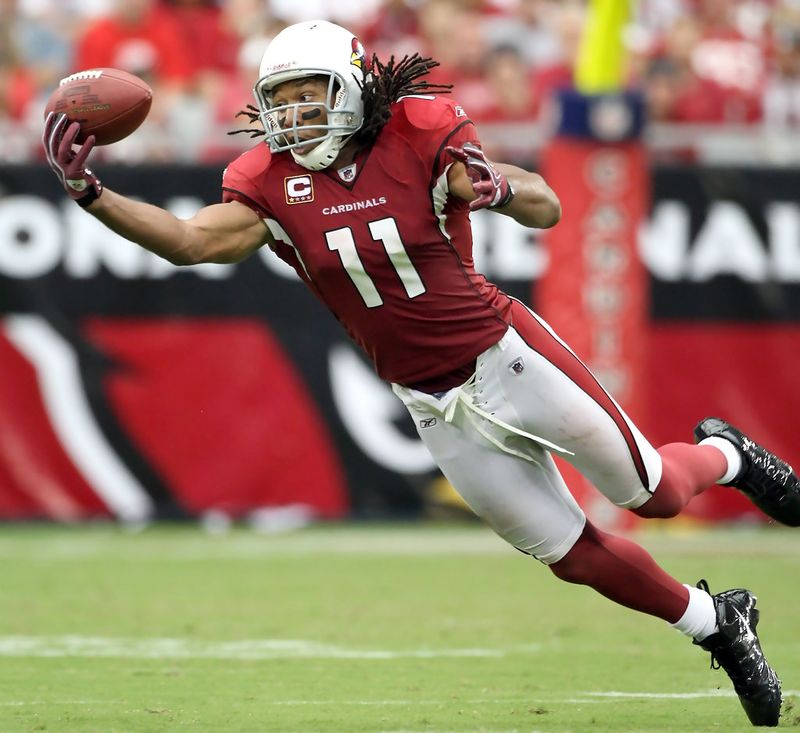 Cardinals wide receiver Larry Fitzgerald is part of a multi-faceted offensive attack that could prove to be the Eagles biggest remaining test defensively.

Outside of the Eagles season finale date with the Dallas Cowboys on December 29th, Sunday's showdown with the Arizona Cardinals may very well stand as the most intriguing matchup of the remaining five games on the schedule.

Cardinals head coach Bruce Arians and Todd Bowles both have ties to Temple University, the Philadelphia area and Bowles finished last season as the Eagles defensive coordinator. Both can make a pretty significant case that they were each passed over in favor of the Eagles hiring Chip Kelly as head coach.

Then there's the fact that Eagles linebacker Mychal Kendricks vaguely even remembered Bowles.

"Todd Bowles, Bowles.. You've got to remind me," Kendricks said when asked what he remembers about his former coordinator. "Yeah, that's my dude. He's an aggressive guy. As far as the pressures, they didn't fall off and if anything they've picked that up."

"Carson is playing the best football I've seen in years," Davis told the assembled media Wednesday at the Novacare Complex. "This offense the last four weeks when you really break it down and look at that small capsule of time, that offense is as explosive and hitting on all cylinders as we've faced in awhile now.

"It will be our biggest challenge of the last five or six weeks. Not only is Carson Palmer protecting the football, he's not turning it over and he's spreading it all over the field to all of the weapons they have and they have a lot of weapons."

This season Palmer has been reinvigorated, passing for 2,887 yards, 16 touchdowns and 15 interceptions.

However, perhaps the biggest beneficiary of Arians' offensive attack and having Palmer under center has been Fitzgerald.

The ten-year veteran has already hauled in eight touchdowns on 606 receiving yards and his projected to tie his career best 13 touchdowns in a single season.

"Fitzgerald is probably still the best receiver in the league," Davis praised. "I've got nothing but respect for him and he does a great job getting the ball. He's one of the best reach out and snag the ball guys out there. He has a tremendous drive to succeed."

In addition to Fitzgerald, the Cardinals are getting significant production out of second-year wide out Michael Floyd. The Notre Dame product has 49 receptions for 761 yards and three touchdowns.

While there's no mistaking the multi-faceted attack Arizona brings into Lincoln Financial Field on Sunday, the Eagles defense has been on the rise in recent weeks but will certainly be tested this week.

It's been eight weeks since the Eagles allowed more than 21 points in a single game.

"I love the fact that we have played some good football and gotten some wins with some backups who are getting experience," Davis pointed out. "Anytime you can have backups playing and get wins, it's a win-win."

Davis' troops will get some reinforcements this week with the return of Mychal Kendricks and Bradley Fletcher.

In a stretch run that leaves virtually no margin for error in terms of chasing the division leading Cowboys, it will be critical that the defense continues to play at a high level especially against a team like the Cardinals on Sunday.

There certainly will be plenty of intrigue as the Eagles face perhaps their most important test to date this season.