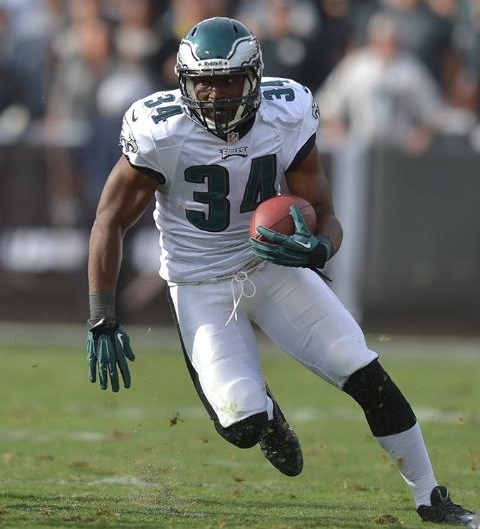 It was easy to lose track of the Philadelphia Eagles running backs, especially Bryce Brown, as Nick Foles was slinging seven touchdowns against the Oakland Raiders Sunday afternoon.

However, after being a virtual anonymous contributor to the Eagles offense through the first half of the season, the second-year running back put forth his best effort of the season Sunday in Oakland.

While McCoy ended the game with more snaps (45) than Brown's 14, he wound up with only 12 carries to Brown's seven. It may be premature to suggest a backfield-by-committee is in the works, Brown was virtually splitting time in the Eagles backfield with McCoy Sunday.

"Yeah, I think Bryce did what we've expected Bryce to do and I think what Bryce expected of himself," head coach Chip Kelly said Monday. "Maybe not on the same scale as Nick.  But it wasn't a surprise to anybody, I guess, that's been around him.  I think he did a really good job of squaring his shoulders up, not really trying to create something that wasn't there.  And he's a big, physical guy."

Prior to Sunday Brown hadn't seen more than five carries in a single game since week four in Denver.

By and large teams have had success limiting the Eagles run game, LeSean McCoy in particular who hasn't surpassed 100 yards rushing since posting 116 against the Tampa Bay Buccaneers in week six. McCoy's performance in Tampa Bay was the only time he's surpassed the century mark since September.

There simply haven't been enough carries to go around prior to this week for Brown to have a legitimate impact on the game, but that could easily be changing.

As teams continue to key in on McCoy and take him out of the run game, Kelly could be inclined to move him around in various formations which would open the door for Brown moving forward.