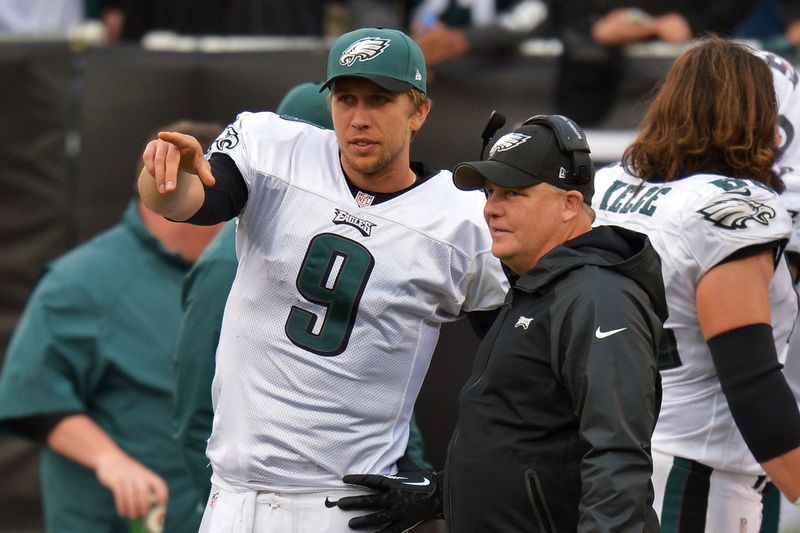 Eagles quarterback Nick Foles had a record setting month of November and Chip Kelly has named him the team's starting quarterback the rest of the season.

Nick Foles had the most statistically efficient month in NFL history in November, on Tuesday Philadelphia Eagles head coach Chip Kelly named the second-year University of Arizona product the starting quarterback the rest of the season.

"I did," Kelly stated when asked if he had met with his quarterbacks following the bye week as he said was the plan following the Eagles win over the Redskins two weeks ago. "Nick will be the starter and we're hoping to have Mike healthy enough to be the backup."

And with that, months of speculation and debate over who should start under center for the remainder of the season drew closure.

“They were both fine,” Kelly said of how his quarterbacks reacted to the meeting. “They understand the situation and Mike wants to contribute any way he can. That’s the type of guy he is. He’s a great teammate, great leader. He’s been great for Nick over the games he’s been out in terms of helping him develop and we’ve got a good situation. I think we’ve got two quarterbacks who can win games in the NFL. And I think you need both of them.”

Much like was the case in August when the first-year head coach named Michael Vick the starting quarterback, Kelly made it clear that Foles has no need to look over his shoulder.

"I've always said and believed that you need one quarterback," Kelly told the assembled media Tuesday at the Novacare Complex. "I think it's important for our guys to go out there with the will to succeed rather than the fear of failure."

Failure is something that Foles has experienced very little of so far this season.

Since coming on in relief of Vick on October 6th at MetLife Stadium against the Giants, Foles has posted a 128.0 passer rating while throwing for 1,554 yards, 16 touchdowns and zero interceptions. The 24-year old is averaging 9.59 yards per attempt in eight games this season.

Kelly did however hedge his bets on his decision though, saying that health is the ultimate wildcard in a situation such as this.

In addition to Vick's hamstring injury, Foles was concussed and knocked from the game against the Dallas Cowboys on October 20th, causing him to miss the next week which coincidentally was a game that saw Vick hobble off the field in the second quarter in what could develop into his final appearance in an Eagles uniform.

"I've said it a thousand times and I'll say it again; you have to think about this on a one-week basis and that's it," Kelly insisted. "Long-term in the NFL is one-week. I'm hoping this is a one-week thing. Don't jinx him, I'll blame your ass. As long as we can stay healthy we will but as soon as you can predict the future we'll go to the race track together."

In spite of Kelly's concern over injuries, it is now apparent that Foles will officially have the rest of the season to prove whether or not he can develop into the Eagles franchise quarterback of the future.