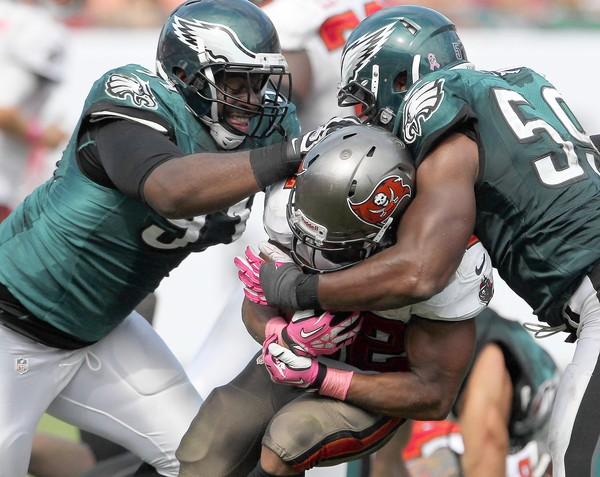 The Eagles defense has markedly improved in recent weeks, allowing just 18.25 points per game but will be put to the test by Raiders quarterback Terrelle Pryor. Photo Courtesy: MCall.com

Terrelle Pryor won't be the first multi-threat quarterback to line up against the Philadelphia Eagles defense this season.

On September 9th Robert Griffin III made his return against the Eagles on opening night to the tune of 329 yards, two touchdowns and two interceptions in a 33-27 Philadelphia win.

Still, Griffin was less than fully healthy that night in Landover, Maryland and even on his best days is unlikely to unleash the kind of run that resulted in a 93-yard touchdown that Pryor dashed for against the Steelers last week.

“Pryor is a phenomenal athlete,” defensive coordinator Bill Davis said Wednesday.“The more film you watch, he makes you say ‘wow’ a lot of times with his escapability. We’ve got our hands full this week with trying to keep him contained and really limiting his playmaking ability, which is tough to do because he’s such a versatile athlete. He’s big, he’s strong, he can move, he can throw the ball and his escapability is probably the best we’ve faced.”

Through six games Pryor has thrown for 1,149 yards and five touchdowns to go with seven interceptions.

“He’s getting better each week (as a passer),” Davis said. “It’s interesting to watch his progression because you can tell that the offense has kind of moved to what he does well (that’s what) they’re doing the most. He had a great game passing against San Diego, he lit them up. He’s got the skill set, and like most young players, as they play more, they start settling in and saying, ‘You know what, I do belong and I can play this game.’ You can see the confidence growing in him, and we’ve got our hands full trying to stop this offense.”

However, the Ohio State product is certainly much more renowned for the damage he can do with his legs. To that point, Pryor has accounted for 391 yards rushing and two touchdowns while averaging 7.4 yards per carry.

"Yeah, he's a duel threat," Trent Cole said Thursday at his locker stating the obvious. "You've gotta wrap him up. That's it."

To that end the Eagles defense has vastly improved in recent weeks in points allowed but this season as a whole Davis' unit has become a much better tackling team.

We work on tackling every day as a fundamental in practice, and I think we've got a defensive staff that teaches it really, really well," head coach Chip Kelly said Thursday. "  The other thing that's always key to tackling is how many people do you get to the ball, so it's not open field tackling all the time.  If you get everybody that consistently runs to the football and we're swarming the ball carrier, then it makes tackling a lot easier because the guy doesn't have as much space to go."

"He's a heck of an athlete," Nate Allen said. "We have to stay disciplined. A guy like that can beat you with his arm but he can also beat you in all aspects of the game so we just have to all stay disciplined out there."

The defense held the Giants out of the end zone on Sunday and the Cowboys in week six to just 17 points and now must contain Pryor and a Raiders offense that is scoring 18 points per game on the year, but is averaging 314 yards per game.